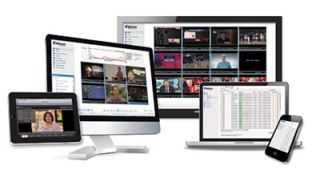 NEW YORK—In 2004, the CBS News record room was bombarded by requests for records of aired news feeds, not only from our own network operations, but also from competing networks.

We simply couldn’t meet the demand and needed a better system to handle these requests. This led us to become the first user of Volicon’s Observer video monitoring and logging system, and it’s played a key role in our operations ever since.

NO MORE VIDEOTAPE JUGGLING
This robust system ensures that we never miss a recording, and that we can locate, view, and/or export recorded content quickly and easily. Rather than find and copy content from tape to tape, staff in the record room simply mark in and out points and make the selected video accessible via URL.

Observer continuously records multiple channels for several months, thereby saving wear and tear on dozens of recorders, eliminating the cost of storage media, and freeing up staff for other tasks. As we don’t have to set up ingest, configure recording times, or establish search mechanisms, Observer also offers the benefit of economical, efficient storage and access with minimal engineering or user involvement.

As the Volicon Observer enables such rapid browser-based access to multiple channels of recorded content, it has become a crucial element in much more than the monitoring and logging of daily programs. Once our editors found out about the system, its use began to cross many departments within CBS. Now our promotions department uses Observer to ensure that commercials aired properly. CBS Radio uses it to grab audio clips for on-air production and our legal department uses Observer to pull clips for evaluation. Even transcribers working in India rely on the system as they create written transcripts of our programs.

VIEWING THE COMPETITION
Around the newsroom, people use Observer interface to watch and compare multiple channels—all synched up and streaming simultaneously—at their desks. A six-channel Observer records all major news networks, so our staff can compare live broadcasts or look back later to see how each network presented the day’s news stories. The system is continually logging, so we don’t have to watch every minute in real time.

Whether we’re tracking down a news story, fulfilling a request for a particular clip or interview, or checking on a possible issue or error, we can easily perform a search or dial back in time to let us locate and review the video, and export the result via an emailed URL or by burning a DVD. This process is fast and can be completed at the desktop by our staff. The Volicon’s closed-caption text functionality makes it easy to find specific news topics or even specific quotes.

From our installation of the very first Observer system here at CBS, Volicon has been very responsive to our feedback and over the years, the Observer system has grown accordingly, proving to be a very successful and popular solution across our broadcast operations. We now have systems at WCBSTV and at our broadcast distribution facility for recording outgoing and satellite return feeds.

Mel Olinsky is the director of news operations for CBS News in New York. He may be contacted atolinskym@cbsnews.com.