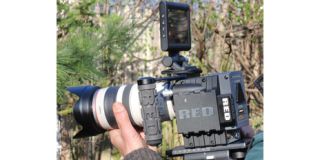 We’ve been transitioning to 4K video acquisition long enough now that camera designers and manufacturers are already looking at 6K, 8K, or 12K resolutions and beyond. RED’s Epic is a prime example of such a camera that’s now available for lease and purchase at the high end. But what about quality minded producers who typically don’t have big budgets? Unfortunately, there were no 4K cameras available without correspondingly large price tags. However, that’s no longer the case with the introduction of RED Digital’s long-anticipated Scarlet.

It’s dubbed Scarlet X in recognition of its Mysterium X sensor that enables the capture of 4K and even limited 5K raw video. While the “brain” costs $9,700, basic packages start at $13,000, and can easily double the price. However, it’s still priced well below the competition.

FEATURES
You can capture 4K and 4K HD (16: 9) RED raw at 24 and 30 fps, 3K at up to 48 fps, and 2K at up to 60 fps, and even capture at 5K, but with a 12 fps limitation. On the other end of the scale, it does 120 fps at 1K resolution. Also included in the feature set is HDR (high dynamic range), which protects highlights with an exposure latitude of up to 18 f-stops. To achieve this, the camera actually captures two streams of video—one exposed for highlights, and the other for shadow. There is a tradeoff though—when this feature is used, maximum frame rates are cut in half.

The Scarlet can be outfitted with either a standard cine PL mount or Canon EF lens mount. It records up to four channels of audio, with levels adjusted via the touch-activated VU meter in the menu’s audio “chapter.” Color-coded audio levels are displayed in the viewfinder and LCD screen. However, there’s no mic mount or utility shoe included with the basic package, although other options exist once rails are added.

Recordings are made on RED Mag solidstate media that’s available in 64, 128 and 256 GB capabilities. More than 160,000 frames of RED raw content at data speeds up to 180 Mbps can be offloaded with standard CF cards. Files can be color corrected and simply edited with free RED software, facilitating export to other Mac or PC-based editing or effects additions.

IN USE
I tested the Canon EOS package with a Canon EF-mount Scarlet brain, side handle, RED View 5.0 monitor, 64 GB RED Mags, and a RED Mag player. I used my Canon 100- 400 mm EOS and Tamron 10-24 mm lenses. Unfortunately, despite being a perfect fit, neither the automatic exposure or autofocus features worked with the latter lens.

And even with the “integrated” Canon 100-400 mm lens, there were challenges in calculating exposure. With digital cine cameras such as the Scarlet X, what you see in the viewfinder isn’t necessarily what you get, and even though there may be a lot of exposure latitude, it’s good to be as correctly exposed as possible. A histogram is provided, but I imagine that most ENG shooters could probably benefit from some education in reading such histograms and it took me some time to get consistently accurate results. With most ENG cameras you get low light level warnings and zebra bars to avoid clipping highlights. You can get the same info from the histogram, but the user feedback and evaluation processes are different and can easily fool a neophyte such as myself.

For ENG–style shooters, it’s worth noting that Scarlet’s user interface is quite different than that associated with most ENG and lower-end EFP cameras. There are, perhaps, more similarities to DSLR interfaces. However, digital cine camera users, and RED users in particular, should be right at home.

I launched my evaluation, doing my test shooting primarily outdoors—chiefly shooting on a tripod—and was impressed with how smoothly and easily I was able to pan and tilt with the roughly 10 pound Scarlet package and also comfortably move around with it in brush and mire.

Despite Scarlet’s touted integration with automatic EOS auto exposure and focus functions, I faced challenges with each. My biggest issue with focus was inconsistent results in connection with the color-coded center focus-assist feature that has a red “box” in the center of the viewfinder that’s supposed to turn yellow when you’re nearly focused, and green when you’re spot-on. I found that it often stayed red even when I was well focused, and rarely stayed green. More often than not, it was flickering back and forth to yellow or red when I shot at shallow depths of field. I ended up making the final focus call with my eye, as the assist feature seemed so inconsistent.

I found that in exposing, you can certainly better your margin of error by using the HDR function. However, this does cut your maximum frame rate by half. When shooting backlit subjects, the frame rate tradeoff is worth it, but isn’t really needed with good frontal lighting. As one of my foremost objectives was the testing of slow-motion capability, I used HDR sparingly.

I was pleasantly surprised with the slow motion, even though it maxed out at 2.5x than real time. When capturing slow moving creatures, the languid effect was quite noticeable, and also quite “clean,” thanks to progressive frame capture. I was disappointed in not being able to crank up to 120 fps for really palpable slow-mo, but I was pleased with the 60 fps result, and believe I could push it to 120 fps in post.

I need to note that when I first tested Scarlet X, the 1K mode wasn’t yet enabled. Hence I couldn’t visually verify what a difference a doubling of the max frame rate to 120 fps could make, albeit at reduced resolution (1280 x 720). Luckily I was able to get a Scarlet for evaluation again shortly after the v3.2 build was released. Among other things, it included a 1K SD mode and widescreen SD modes for higher resolutions. As expected, higher frame rates can be achieved in SD than in HD modes. The disappointment was in learning that the maximum 120 fps rate could only be achieved in WS (SD) mode.

Oddly enough, 89 fps (not 90 or 96) is the max rate achievable in 1K HD mode. However, considering that Varicams max out at 60 fps (1280 x 720), this isn’t all that shabby. In fact this approximately 30 fps difference is quite distinctive as I noticed when shooting my long-legged mixed Shepherd running at full gallop. At 89 fps, appendages such as dangling tongues and ears seem to hang suspended for seconds before gently fully descending. At the more familiar 60 fps, they descended much faster, much as anticipated by my mind’s eye. The same was true for flying geese and crows. Perhaps the simplest way to summarize the look at 89 fps is that it produces a much more “dream-like” effect than is possible at 60 fps. As when shooting at other resolutions, frame rates, and shutter speeds, proper exposure is critical, but this can be achieved correctly and automatically with many lenses, several of which are enumerated on a table in the Scarlet user’s guide. This can also be done manually using the histogram on the main screen.)

The ultimate beauty of capturing raw footage with Scarlet is the amazing latitude in post—at least 10 to 12 stops. RED Cine X’s color correction and overall image correction capabilities can undo a multitude of errors. I found Cine X fairly easy to work with, and was able to turn dull low-contrast images into sparkling, perfectly exposed and naturally colored scenes in a short time. You can quickly apply the same look for a series of shots and cut a simple sequence out of them.

Apart from its ability to capture stunning images, the camera’s touchscreen interface is an “I-thing” that users dream about.

The camera does have one limitation, though—cold weather. When temperatures hovered around freezing, I occasionally had to tap the screen several times for a response. The answer was in the specs, which state that the normal operating range cuts off at 32 F, which for northerly shooters could be a serious liability. Heated jackets are an option, but not for sustained and extreme cold.

SUMMARY
In many respects, RED’s Scarlet has exceeded expectations by bringing in very high resolution capability at a better price than most pro 1080p cameras. The modular design makes it feasible to shape the unit to be the camera you want it to be.

The only big shortfall is somewhat limited slow motion capability. However, in many respects the camera is very similar to the RED Epic, and if you’re looking for a much more affordable alternative and are willing to compromise on a few features and don’t need to shoot at more than 4K resolution, this may very well be the camera for you. It looks feels and handles the same as the Epic, although the image may not be quite as stunning. The Scarlet is not intended for shooters married to the ENG shooting model, but rather for those really ready to take the plunge into feature-style small crew production of dramas, reality shows, documentaries, or perhaps music videos. If you’re involved in these, the Scarlet X may be well worth adding to your camera tool chest.

Carl Mrozek operates Eagle Eye Media, and specializes in wildlife and outdoor subjects. His work regularly appears on CBS, PBS and other networks. Contact him ateagleye11@gmail.com