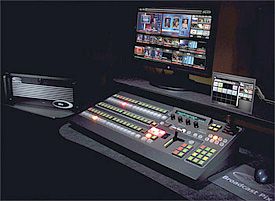 The next generation of production switchers, routers and control gear are finding footing in the market in new ways—some by introducing compact mini models of flagship products; some by melding traditional switching gear with branding graphics; some by simply offering new features that take format-agnostic processing to new levels.

BHV Broadcast will show the new Callisto Pico, a two-input switcher based on the Callisto Micro that offers entry-level broadcast features and a comprehensive set of I/O facilities. Control is by local panel or remote interfaces.

Panasonic HS410
In an effort to help producers create voice-activated video productions, Broadcast Pix will introduce VOX, which allows producers to create voice-activated video productions on the company's Granite, Mica or Slate integrated production systems. The company will also show its compact Mica production system, which can mix eight HD/SD-SDI inputs with seven channels of internal clips, animations, and graphics. Also new is Video Control Center 3.0 software for its Granite and Mica Video Control Centers. The new 3.0 software features the first optimized production control on a touchscreen, first voice-automation control of switching and graphics, powerful virtual sets that anyone can customize, and automated, dual-channel graphics that include Daktronics scoreboard integration. Video Control Center 3.0 is a free upgrade to all Granite and Mica customers.

Grass Valley production solutions include the likes of Kayenne, Karrera and Kayak, which will be shown alongside the newest version of the STRATUS 2.0 workflow tool.

Panasonic will showcase its HS410, a compact, 19-inch rack width 1+ ME live switcher that provides, as standard, nine signal inputs (eight HD-SDI, one scalable HD DVI-D), and is expandable with option boards to a maximum of 13 HD/SD switchable signal inputs.

Pixel Power will tout its BrandMaster family of branding switchers, which integrate a master control switcher with broadcast graphics for channel branding purposes. The system injects branding graphics capability at the point of transmission in an effort to reduce the complexity of the signal path and to streamline channel branding.

Roland Systems VR-3Ross Video will be on hand at the big Las Vegas show to highlight new evolutions to its core production switcher offerings. The Vision Series will showcase a new integration between switcher, graphics and production control. Booth visitors should also look for the mid-size Carbonite switcher includes enhancements such as expanded multiviewer capabilities.

In the production arena, Snell will showcase a new version of the Kahuna 360 Compact production switcher, which features seven keyers per ME, resource sharing with Make M/E technology, and format agnostic capability. The system features a 6 RU chassis and support for SD, HD and 1080p functionality.

Sony will show 3D capable switchers—including the multiformat MVS-7000X. The switcher is designed for a wide range of applications while delivering similar high-end performance as the top of the line MVS-8000X model, at a more cost effective price.

Sierra Video Aspen 3232 Routing SwitcherWideOrbit will be on site at the Las Vegas Convention Center with their WO Master Control, which provides up to 16 channels of HD/SD, master control switching, graphics, automation and storage in a single IT server rack. The system's architecture uses off-the-shelf technology with direct-to-storage file transfers without transcoding, reducing power consumption and heat generation.

Blackmagic Design will showcase its line of routers and control panels, including a new software update to its Videohub SDI and Smart Control panels that adds new macro support and advanced networked-based configuration of control panels.

BLT Italia will show the RUS-Clone, a virtual control panel that integrates with the hardware controls panels of the BLT RUS series.

New control solutions from DNF Controls include the Production Control Application as part of the Flex Control Network, which controls video and graphic playout devices. The new Tally Control System will also be on display, which is a complete system for end-to-end management of IP-based machine controllers. Also on display will be the AnyWhere Interface Box and the GTP-32 control processor, a programmable logic controller and GPI tally processor.

Gefen's lineup of routing matrix gear includes the GefenPRO, a 32x32 DVI matrix that routes any 32 computers to any 32 displays. Also on display will be the Professional Automation Control System, or PACS, which is designed to ease the control of HDTV displays, switchers, distribution amplifiers, scalers and more from a central interface. Other Gefen options on display will include the Gefen ToolBox 8x8 matrix.

New upgrades to the Harris brand of Platinum routers include matrix expansion functionality to support the integration of large monitor walls and multiviewers. New features include including multiviewer signal processing and monitoring, audio mux/demux, and frame synchronization.

IHSE USA will show the Draco tera 48, a high-speed HD-KVM matrix switcher, as well as the Draco tera 80, which can be configured as a fiber or Cat-X switch fabric.

Miranda Technologies will show a new variant of the Nvision 8500 Hybrid router, which integrates with the Kaleido monitoring integration solution and is targeted for trucks and small-to-medium sized production studios.

Orad will showcase the TD Control, solution, which allows technical directors to switch on air from six video sources to different sources with the click of a button.

Roland Systems Group will introduce a new audio mixer/video switcher for live production and Web streaming. The VR-3 is a portable unit weighing less than five pounds with an intuitive touchscreen interface for switching video sources.

Sierra Video will introduce the Aspen 3232, the first model in a new line of compact video 3G HD-SDI routing switchers from the cmopany. The compact 2RU and energy efficient Aspen 3232 is a multirate router compatible with 3G, HD−SDI and SDI signals from 19 Mbps to 2.97 Gbps (3G).

Snell plans to show the new hybrid processing technology built into the Sirius 830 router. The new 15RU Sirius 830 features high-performance modules for flexible routing of SD, HD, ASI, and 3 Gbps signals. The company's new Vega router will also be on display, a new routing platform that allows users to configure any signal port independently for fiber and/or coax, easing a mixed connectivity environment.

For control of router I/Os, Television Systems Limited will be at NAB with the TallyMan Virtual Panel, a touchscreen panel designed to simplify control of multiple router I/Os across the broadcast chain.

Thinklogical will highlight the MX48, a compact, protocol agnostic, and modular router for end-to-end routing of video and peripheral signals over multimode or single-mode fiber-optic cable. The 3RU MX48 is suited for small- to medium-sized computing environments. Router management tools like the X4 Configurator will also be on display.

New from Utah Scientific are UCP-LC control panels for the UTAH-400 series of routing switchers. The UCP-LC series panels offer 16 or 32 buttons in a 1RU package, and a 3RU panel with touchscreen LCD displays. These panels are based on a new, user-definable menu that provides an open platform for defining all panel functions.

Utah will also display the new FLEX I/O signal module for system configuration, as well as new embedded-audio signal processing features as part of the UTHA-400 series that come courtesy of a new line of I/O boards.