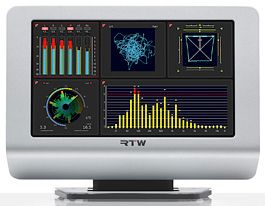 RTW will reveal upgrades to several of its products at the NAB Show, including the TouchMonitor series, DigitalMonitor 10500X-Plus and the SoundControl 31900/31960 series.

RTW will show its new software version of the TouchMonitor audio metering series, which provides additional features and display modes. The TM9 and the TM7 combine flexibility and modularity with an intuitive user interface. The TouchMonitor series was first unveiled at the 2010 NAB Show.

SurroundControl 31900 RTW will also introduce software and hardware upgrades for the 31900/31960 SoundControl series, designed to support the new EBU/ITU loudness regulations. The SurroundControl 31960 combines control, analysis and monitoring of eight-channel 5.1 to 7.1 surround sound into one single system. It is a compact, 3 RU rack-mountable module that fits into half the space of a standard 19-inch installation rack for waveform monitors.

Also on display, will be the new Version 3.0 for RTW’s line of DigitalMonitor 10500X-Plus instruments. It features an integrated loudness measurement as per the recent ITU BS.1771 loudness standard for stereo signals.