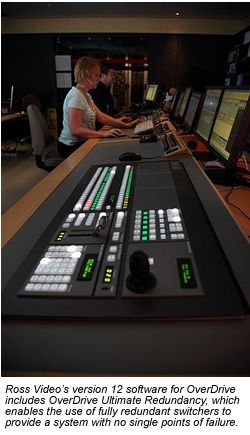 Version 12 software introduces SideBox and SideSlide, two new control surfaces that give an operator a new level of control over all production elements.

SideBox allows mapping of any button press or automation system function to a 28-button shot box, while SideSlide provides tactile control of audio to provide control among APC systems. The new control surfaces can be placed at the user’s fingertips, regardless of the location of the OverDrive client screens or production switcher panel.

Version 12 also includes OverDrive Ultimate Redundancy, which enables the use of fully redundant switchers to provide a system with no single points of failure.