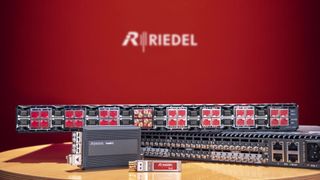 "Since Embrionix joined the Riedel family late last year, we have worked relentlessly to integrate their powerful technologies into our video solutions portfolio,” said Thomas Riedel, founder and CEO, Riedel Communications. "We are really proud of what we have achieved as a team, and we are happy to present our common vision for the future of video networks with the MuoN, VirtU, and FusioN series."

The MuoN SFPs are at the heart of MediorNet products. The compact, pluggable gateway and processing device can be used inside VirtU frames or off-the-shelf IP switches. Software-defined MuoN hardware is available in different input and output configurations, including BNC, fiber or HDMI. It can be configured with different apps, and with a software license change it can act as an up/down/cross-converter, a JPEG-2000/XS encoder or decoder, audio router or multiviewer, the company said.

Riedel’s VirtU IP core infrastructure platform can host a large number of MuoN SFP processors in 1RU. It can be used as a bulk gateway and a high-density processing unit. The company’s FusioN product series is a series of compact, standalone I/O and processing devices that can be configured with a range of apps, the company said.

The company also has launched several new apps for up/down/cross-conversion, encoding/decoding, audio routing and multiviewing, as well as a series of IP gateway apps.