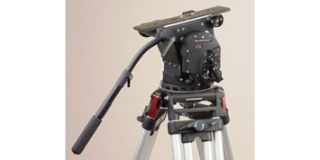 ATLANTA— We’re responsible for shooting “Necessary Roughness,” a USA Network series about a female psychologist whose main practice is a fictional NFL team. While our main character’s majority of clients are NFL players, she also treats other sports and show business patients. This sets things up for a wide variety of subject matter—and a wide variety of camera challenges— everything from football games to rock-and-roll concerts, and even a magician. And because of this, my choice of camera support is very crucial. That’s why I chose my tried-and-true standby, the OConnor 2575. (No geared heads, please.)

OConnor’s 2575 fluid head ONE HEAD DOES IT ALL
I’ve personally never seen a shot that I couldn’t execute with the 2575, but I’ve seen a lot of shots that a geared head couldn’t do. Sure, there’s a place for both in our industry, but with a large package such as ours (we have four ALEXAs), there’s really no room for excess, so it had to be OConnor 2575 fluid heads.

To give the audience the “feel” of NFL (and other) competitions, we shoot a lot of documentary-style scenes that are rather free form. That’s where the OConnor fluid head really shines. As we can point the camera almost 90 degrees up and down with perfect balance, there are never any restrictions. My A-camera operator, Steve Andrich, also shoots for NFL films. He regularly follows a passed football with a 500 mm lens, filling the frame and never losing the ball. You just can’t do that with a geared head.

There are times when we have to get a very low angle shot and even hang the head and camera upside down on the dolly to get right on the ground. This particular vantage point comes in handy when you’re tracking a player’s feet as he runs on the football field. I know that the OConnor heads aren’t really designed for this, but it does provide us with the type of shot we need. And in post, the digital images we’ve captured are easily inverted with just the push of a button.

50-YEAR-OLD HEAD GOING STRONG
In one show episode we needed multiple low angles, so we used my trusty old OConnor 100 fluid head that dates from the mid-1960s. (It was once owned by Fouad Said and used in the production of the original “I Spy” TV series.) This thing is so strong that I’ve put a Panaflex loaded with an 11-to-1 lens and 1,000 foot-magazine on it with no problem. This puts a tremendous load on this half-century-old piece of equipment, yet it just keeps on working. You just can’t hurt it.

With shows like “Necessary Roughness,”where 50 to 60 setups a day is average, there is no room for error. You need equipment that performs and can be relied upon. The OConnor heads are it. They’re just as reliable as the sunrise.

Bill Wages, ASC, was honored with the ASC’s Television Career Achievement Award in 2012. He may be contacted atwww.williamwages.com.