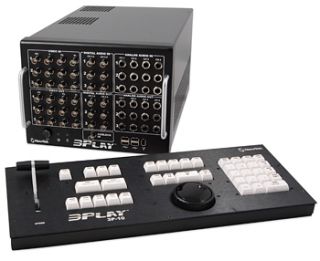 It's likely that everyone who watches any amount of TV at all knows what an "instant replay" is. However, very few viewers know the intricacies of slo-mo acquisition, preparation and playout. In fact, many who work in broadcasting have never seen or operated a slo-mo/replay box. The technology has evolved from a "wet film" version in the 50's, to dedicated servers with shuttles knobs and faders, reminiscent of ENG editors from the 80's and 90's.

3Play is a single-chassis unit with an external control surface, the 3P-10. The main chassis is 10.5x8.5x17-inches, and weighs slightly less than 20 pounds. The external control surface is keyboard size and uses a single USB for connection. The front of the main chassis has BNC's for three channels of either SDI or component video I/O, along with digital audio I/O BNC's for channels 1/2 and 3/4 of each of the video channels. There are four channels of balanced analog audio I/O per video source, along with a dozen 1/4-inch phone jacks. Located also on the front of the main chassis are the power switch, power indicator LED, a hard drive activity LED, genlock in BNC, and four USB receptacles.

The rear of the main chassis contains the A/C power connector, on/off switch, and all of the usual connections you'd find on a PC, including two DVI connectors, SATA connector and 1394 Firewire connector.

The 3P-10 control surface playout speed controls include a "T-type" fader bar and quick select speed keys for 25, 33, 50, 75 and 100 percent of normal playback speeds. For transport shuttling through clips, there's a large roller knob, reminiscent of a VTR shuttle control, along with stop, play, play highlight, and "live" buttons for playout and control of clips.

An "alt" button adds more functions to certain buttons, such as looping. "Quick" buttons are provided for jumping forward or backwards in the video by up to two seconds. To manage the replay list, there's a numeric keypad on the right side, along with "remove" and "clone" buttons. For playout selection three additional "quick" keys, 1, 2, and 3, select either three outputs or a single switched output.

An "event list", including six tabs across the top is provided on the right-hand side of the PC display. They're labeled "Master," "Yellow," "Red," "Blue," "Orange," and "Green." The "master" displays all of the clips; selecting a colored tab only displays the clips chosen for that category. Below the tabs are the columns where the clips reside, including "ID," "In-Point," "Duration," "Comments," and "Camera" (video sources 1,2,3). Below the full-length event list there are "Remove", "Clone", and "Export" buttons.

The 3Play came with a quick start guide and a bound paper user's guide. Hooking things up to the back of the unit resembled wiring up a PC, while connections to the front were pure broadcast. After connecting the mouse, PC monitor and keyboard at the rear, I provided a few 1080i video sources to the front-panel SDI BNC's. These included feeds from studio cameras and an NBC feed straight from the IRD. For monitoring, I used an Optiquest CRT unit fed from an Evertz 2430DAC-HD converter.

After everything was in place, I powered up the 3Play. Boot-up was uneventful, and in a very short time I had a screen that allowed me to either start a new session, open or manage an existing session, view the system utilities, and more. After selecting "New Session," my video format and output choices appeared. It was all very straightforward. I selected 1080i and three inputs with one output, and then pressed "start session." After about 10 seconds, the primary operating screen appeared.

The operating screen is laid out in sections, with a big "record" button on the top left, and also a "session time" display, along with a "remaining disk space" window.

Video "windows" are provided for input sources—one, two and three—with a larger window for the output source to be displayed. Below the "playout" window there's a timer for display of any time delayed; and finally on the bottom of the display there are three more video windows for displaying up to three cameras associated with clip playout. Each of the I/O screens has a display for audio channels 1-4 adjacent to it.

When the operating screen appeared, it was apparent that I had video inputs on all three channels (two cameras and NBC); however, there was no audio shown to be present on the network feed, as it was embedded. Using the "tool" icon at the top of the screen, I dropped down a selection menu where each I/O's formats for audio and video are selected. After choosing "embedded audio," the associated metering then reflected the audio as being present. I then tried out the various modes.

First, I hit "record," which produced a green highlight around the "input 1" video window. When I placed an "in point" cue, a "clip" appeared in the event list.

I then clicked on the event and pressed the "play" button, and finally got to operate the "jog" knob. This allowed me to move forward and backwards in the clip.

In viewing the video, the quality was nothing less than superb—no jagged edges, and very smooth motion.

When NBC goes to black for local breaks, they throw peacock feathers toward the middle of the screen and create their peacock. I made a clip of that animation and placed in-points and out-points where the peacock began to assemble and where it was complete. By pressing the "alt" key and the "loop" key together, I was able to get a loop of continuous peacock building. And by pressing the "-2" and "+2" keys, I could add two more seconds to the start or end.

I tried out the feature that allowed me to clone clips to make sequences while selecting various sources for playback on each clip. (When you create an event, you see all three sources from which to choose.) Each feature I tried was easy and intuitive to implement, and at no time did the video output quality degrade or suffer. It was all quite impressive.

While the unit has a broadcast feel, its modern PC genes are evident as well. It was nice to be able to unplug the mouse from the rear and then connect it to the front while the unit was working and not have to re-boot. Also, adding comments to a field or changing the names of the tabs is as easy as right clicking and writing what you want.

Even though I've not had years of experience as a sports slo-mo replay operator, I felt pretty comfortable with the unit after just a few sessions. I kept it on for several weeks, and gave it many workouts. Each time, 3Play performed flawlessly. The video quality was always top notch, even with several channels going at once. While it would have been nice to see all six channels of NBC's 5.1 audio feed, this should not be a deal-breaker in dealing with slo-mo playout. This box is really slick.

Joey Gill is chief engineer at WPSD-TV in Paducah, Ky. He may be contacted at respond2jgill@yahoo.com.