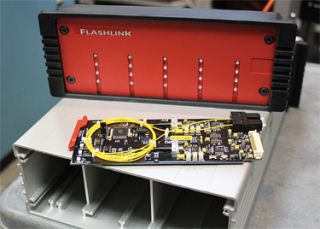 The Nevion FlashCase
Many broadcasters have a complete "tech core" full of modular devices, with most of those devices installed and operational for daily duties. However, there are usually some spares, and also some idle leftovers from an occasional plant rewiring job. Wouldn't it be nice to be able to take those cards out in the field occasionally without worrying about damaging the cards or a less than robust card tray. Nevion, a leading video transport systems company based in Norway is offering a way to do that with their FlashCase portable modular interface.

The FlashCase is a ruggedized, weather-resistant, portable enclosure for Nevion Flashlink series modular cards. The unit appears to be constructed of cast aluminum, and has rubberized edges front and rear. The FlashCase weighs slightly less than eight pounds un-populated, and about 11 pounds when fully loaded. The overall package size is about 14 x 9¼ x 3¼-inches, and the unit requires 11 to 15 Volt DC power. The supplied external power supply is rated at 15 VDC, and can supply a maximum of 1.6 amps. There are no cooling fans, as the chassis and Flashlink cards consume very little power. Depending on the configuration, the backplane usually comes fully populated with three-pin XLR's, four-pin XLR's (DC in), TJ-45s, BNC's, three RJ-45's, and your choice of two fiber-optic receptacles. There are guards to protect cable terminations; however, the unit's front is sufficiently solid and doesn't require much protection. The chassis can accommodate five Flashlink cards, and the front panel has rugged, clear plastic windows to allow status interpretation of the four tri-color LED's on each card. The panel is removable via four hex-head screws.

For this evaluation, Nevion shipped a couple of fiber I/O cards, an HD-OE-2 dual optical-to-electrical converter and an HD-EO-2 dual electrical-to-optical converter. The Flashlink line includes electrical/optical and optical/electrical converters, embed/de-embedders, signal processors, format convertors, synchronizers, WDM/CWDM/ DWDM, optical multiplexers, and TDM multiplexers for most signals, including video, audio, optical, IP, and data. Also provided was the full-featured 2RU studio Flashlink chassis. It accommodates as many as 10 cards and is equipped with dual power supplies.

After unpacking both card trays, hookup was rather easy—one chassis contained an HD-EO-2, and the other was equipped with an HD-OE-2. I placed the units back to back on a cart and connected AC power to the Flashlink Chassis (studio unit), and hooked up the external supply to the FlashCase. When power was connected to the units, the top and bottom LED's in the cards encouraged me by glowing green. There were also a couple of illuminated red LEDs, which I assumed to be signal status lights, as no signals were yet connected.

My next order of business was to locate some fiber optic cable for testing. I soon found a 30 meter length of 62.5/125 optical cable which was fitted with dual SC connectors on one end and dual LCs on the other. Both of the modular chassis units were shipped with SC fiber fittings; fortunately, I had an LC "coupler." Once I connected the SC ends to the modular frames and added the LC "turn-around," I had a 60 meter length of optical cable connected between the backplanes of the two units. I now expected that some of the red LED's would change color or go out, but they didn't. After double checking, I decided to clean the ends of the optical cable. I was then rewarded with a yellow LED where a red one had been earlier.

The next step was in adding a SMPTE 292 HD signal. Since I knew that the Flashlink chassis (studio unit) contained the receiving module, I connected a BNC-fitted HD video cable from my house router to an input on the FlashCase backplane. At this point, I reckoned that I had a one in eight chance of success, as the back was not labeled. According to Nevion, the unit I was testing was a field demo unit with the normally provided labeling missing). I struck out the first time, but then moved the BNC connector to the other end of the row of BNC's and was rewarded with a picture and sound at my monitoring station. In addition, the yellow LED on the receive module now glowed green. After an extended period of testing, I downloaded FlashCase manual from the Nevion Website and found that most of my guesses had been correct—when a proper signal is received on the OE module, the built-in re-clock circuit locks, resulting in a green LED.

I found that removing the modules from the traditional Flashlink chassis was an operation much like that associated with most other units now on the market. The cover is easily removable, and the cards have plastic guides top and bottom. There are also "lever" insertion helpers, and the fiber cards have spring-loaded connectors at the back to ensure solid lockup.

The FlashCase is a bit different, however. First, top and bottom card-guides are cast into the aluminum housing. The removal of the front panel required the unscrewing of four hex head screws, and there's no latch for the insertion "lever" to engage. If you have the fiber cards inserted with the front panel removed, it might be possible for the cards to pop out from external vibration. It would be a smart move to leave the front cover on when such modules are used.

The FlashCase is a very solid piece of workmanship. It's built for abuse, and appears very rugged, inside and out. The Flashlink cards I tried were easy to operate, and very intuitive, and the quality was second to none. The ability to use DC for powering modules would be handy in many circumstances, and for single card use Nevion offers the Ultra Compact Flashlink chassis.