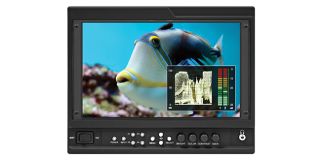 Marshall Electronics’ V-LCD90MD-3G 9-inch field monitor What distinguishes an exceptional field monitor from the rest of the pack?

While that is a very subjective question, I believe that most directors of photography would agree on it being one you can trust and one that that adds value to your project without being a drain on it, either physically or financially. As cameras become ever more sophisticated and offer higher resolutions, field monitors must keep pace, or else become the weak link in the production chain.

Whether or not field monitor technology follows Moore’s Law is uncertain, but there is no doubt that much progress has been made in the past decade, with many units now including features than didn’t appear on studio monitors even 10 or 15 years ago. The current generation of monitors also appear in a size and weight range that seemed unimaginable in the cathode ray tube era. Despite this downsizing, some newer field monitors provide a complete pack of menu settings, including functions previously relegated to very high-end models.

Another innovation and adaptation found in the latest models is modularity— particularly in terms of inputs and outputs, which nowadays tends to be a real moving target. Marshall Electronics has embodied all of this in its new series of compact field monitors including 5.6-, 7- and 9-inch models. They all feature a full feature set, along with HDMI and other I/O modules.

FEATURES
For this evaluation, I opted for Marshall’s V-LCD90MD-3G with a preinstalled MD-3GE module to accommodate 3G/ HD/SD-SDI with loopthrough. Its modular design allows you to select the I/O combinations you need, and even to swap them in the field as needed.

This lightweight 9-inch LCD monitor features high brightness (600 nits) along with a 1000:1 contrast ratio. It sports a 176 degree viewing angle and has a native resolution of 1280 x 768 pixels.

The monitor also supports multiple digital formats and allows users to custom configure front panel function buttons for 32 uses,. It has RGB gain and bias controls, as well as a manual gamma adjustment. It comes with an adjustable IRE Zebra filter, polycarbonate screen protector and much more.

All of Marshall’s new MD series LCD picture monitors are equipped with an HDCP-compliant HDMI input with passthrough, HDMI auto color space and aspect ratio detection, as well as a selection of 10 available battery adapters, including Anton/Bauer, IDX and others, as well as a choice of input and/or output modules.

IN USE
The LCD90MD-3G is Marshall’s newest lightweight (2.1 pounds) 9-inch portable field monitor, which, as mentioned above, can be powered from a large range of batteries or from an AC source. My evaluation monitor came with a V-lock mount, so I used IDX Endura 80s with it when mobile, and the AC adapter when stationary. Oddly enough, the AC option on the power source selection switch is labeled “12 V” as opposed to “batt” for battery). For some users this could be a source of confusion at first blush.

There’s also a smaller power switch with an indicator that glows bright green when the unit is on. This green glow feature is also incorporated in the unit’s input switch and the four assignable buttons as well—all glow when actively engaged.

The input choices on the 3G model that I evaluated were between the built-in HDMI and 3G HD-SDI. I initially found it a bit annoying that this choice was only visible on the screen for five seconds. It took me a few tries before I was able to switch it from the default HDMI input to HD-SDI (3G). (I should note that the input options can also be left onscreen indefinitely via user settings, but this quickly leads to a cluttered screen. )

Actually, I found little need to switch back to HD-SDI, but learned to deal with the five-second window, should it be necessary.

As this monitor is so feature-laden, it would take much more space than I have available in this review to cover them all (and I would probably miss a few in the bargain), I’ll just try to hit the some of the high spots and describe some of the more interesting and useful features that are available.

The input crop feature is particularly interesting and a handy tool that bears some similarity to “focus assist” on many cameras, except that you can focus in on any part of the full image instead of only the center. The result is a detailed view of a portion of the image area, such as a face. The rest of the image area is simply not displayed; however, it can be quickly restored by turning off the input crop in the scaling submenu.

I found that setting up a crop is a fourknob affair, with each knob controlling cropping on a given side of the image. I also discovered that the same process can be used to create custom aspect ratios ranging from 1:1 to 2.39:1 or more. Preset crops include full screen, 4:3, 16:9 and custom.

Another handy feature I discovered was the ability to reduce or exclude the onscreen information that’s normally visible when you’re using some of the popular DSLRs for capturing video. Also, the monitor has four preset crops for several popular DSLR cameras: Nikon16:9/3:2 and Canon 16:9/3:2.

The new monitor also allows you to use a “pixel to pixel” mode when shooting busy subjects where moiré could be an issue. This operating mode provides display of images at native resolution and aspect ratio without any compression artifacts. The images are automatically cropped in the vertical and horizontal directions for display at the native resolution. (1920 x 1080 images are cropped at both edges, while 1280 x 720 images will show black bordering on the 1280 x 768 pixel screen.)

In my exploration of the monitor’s feature set, I found three color temperature presets in the color submenu: 5500 K, 6500 K and 9300 K. You can also finetune the monitor’s color balance by adjusting the bias and gain controls to achieve a particular look and to assist in matching cameras used for multicamera shoots.

Another item I found very handy is the monitor’s peaking function, which allows very precise and critical camera focus. It lets you choose your own color for highlighting the image detail you want to put under scrutiny. Choices are red, green, yellow or blue. You can also adjust the threshold to heighten or lessen the intensity. (It helps to choose a color that is not present in the element you want to put in precise focus.)

In my testing I got pretty good results with using yellow highlighting in a scene that incorporated a shallow depth of field and plenty of dark subject matter. I then switched to red highlighting as the principal subject matter got brighter. (Actually, I decided to save both values in the user settings as they worked well in multiple settings.)With the color overlay selected and the element you want to monitor for critical focus selected, sharp focus is achieved by racking the camera’s lens while watching the color overlay. presentation. It will move from object to object in the scene, with the color standing out on whatever object is brought into the sharpest focus.

Another function that I wished I’d had more time to experiment with is the monitor’s false color presentation. This is a sort of “psychedelic” tool that can be used to set and fine-tune exposure in the most subtle manner. As you adjust the iris, certain features in your image change color in response to changes in brightness and luminance. You tweak exposure via your iris control while watching some pretty interesting psychedelic color changes take place.

I also appreciated the multifunctionality and high-resolution capability of the waveform monitor feature, which appears like a picture-in-picture display, and occupies less than 20 percent of the overall screen real estate. I used it to gauge exposure levels, as it provides a solid indication that you’re approaching the clipping point of white elements or when blacks are just about to be crushed. Despite occupying a small fraction of a fairly small screen overall, this waveform display added a great deal of precision and clarity to what might be some otherwise murky subjective adjustment decisions. It sure beats lugging around a standalone dedicated waveform monitor.

SUMMARY
The LCD90MD-3G is a compact and complex high-resolution field video monitor with many of the key features that are found in good pro-studio monitors. This leads to the only real negative about the product: while its user interface is fairly user-friendly, it could be intimidating to DPs accustomed to more basic field monitors.

However, I found it to be a great monitor for any pro who wants maximum control over the imaging process and who isn’t intimidated by a studio-style monitor while shooting afield.

The LCD90MD could be a commercial shooter’s best friend or a news cameraman’s boogeyman, depending on how much time he or she spends in getting familiar with it. However, the device serves perfectly well as a confidence and imaging monitor right out of the box with its factory default levels in place. With just a bit of study and experience, it can help most pros take their game up a notch without really impacting overall camera package weight and bulk.

Carl Mrozek operates Eagle Eye Media, and specializes in wildlife and outdoor subjects. His work regularly appears on the Discovery Channel, The Weather Channel, CBS, PBS and other networks. Contact him ateagleye11@gmail.com.