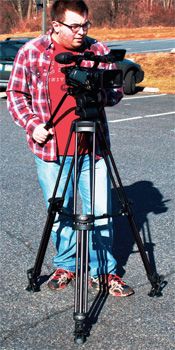 Advances have been made in every area of video production, and tripods are not excluded from that list. At the top of Libec's line of the RS Series of camera support is the RS-450, or RS-450M package, which is comprised of the RH45 fluid head, RT40B tripod legs, BR-4B mid-level spreader, along with FP-2B foot pads or a SP-2B floor spreader option, and Libec's RC-40 carrying case.

The RH45 fluid head weighs less than six pounds and can support a camera payload of up to 26 pounds. It features a sliding plate, three-step drag adjustment, continuous counterbalance, LED-illuminated level, a large camera counterbalance control knob, and solid pan and tilt locks.

The RT40B two-stage aluminum tripod weighs about seven pounds and extends out to slightly less than five feet. This model has a mid-level spreader to help support the camera's weight more evenly, and each section locks with a twist of a knob. Each leg ends in a rubber foot, so floor surfaces won't be damaged when moving the tripod. When collapsed for travel, the legs lock together with a retractable "hook."

The SP-2B spreader extends to keep the tripod's feet firmly in place. I should note that the rubber feet weigh an additional two pounds and need to be removed before using the spreader.

Many tripods list amazing features, but it is the actual use in the field which separates the good from the mediocre. This tripod weighs more than some of Libec's other offerings, but if you have a larger camera that needs more support (like a "mini" jib arm), a smaller tripod just won't do. I prefer using the FP-2B feet, as this allows the tripod to be moved easily and shortens the setup time. If you prefer the SP-2B spreader, you should realize that it takes some amount of strength to get each end into the correct opening and to pull the strap over it to lock it in place. When using our mini jib arm with a camera on one end and 15 pounds of weight at the other end of the eight-foot bar, the spreader added the needed stability. Once the spreader is mounted, you will not have to remove it constantly because it folds easily. However, attaching it the first time does take a little extra strength.

The legs raise and lower easily and our students here found the locking mechanism easy to use, while still providing locking security for an expensive camera perched on top. It's hard to really fall in love with tripod legs, but our school's TV and film department has been using Libec tripods for years and we've never experienced an issue with any of them.

Of course, when the RS-450M arrived, the line of persons who wanted to use it wrapped around the building. I've not seen a tripod getting this much attention before. However, students had been reading about the head's counterbalancing feature and wanted to experience it firsthand.

Located directly under the camera plate on the business end of the RH45 is a large counterbalancing adjustment. Twisting this knob allows you to stop the camera at any angle without having it slam into the legs or knock the tripod over. With the school's collection of various sized cameras (including all-metal 16mm behemoths), we found that the head would spring back with any camera in its weight class.

The smaller knob on the head has four numbered (zero through three) settings for controlling the drag of the head. I really prefer having a number setting for a drag adjustment rather than arbitrarily turning a dial until I believe the drag is acceptable.

And finally the addition of an illuminated bubble level elevates this head from one where a "flashlight in mouth" is necessary to see if the bubble is centered in the black hole that surrounds it. The adjustment under the head has a large enough knob to securely tighten the payload but also easily enough to undo for minor adjustments.

Libec has a real winner with their RS-450M professional tripod system. It's versatile in that it accommodates a multitude of cameras, can be used with or without the spreader, is easily leveled in all lighting conditions, and gives you the peace of mind that the counterbalance will keep your camera where it belongs. The next step is to check back in two years to see if it still functions after being used weekly by hundreds of students—I'll bet it will.

Chuck Gloman is an Associate Professor and Chair of the TV/Film Department at DeSales University. He may be reached chuck.gloman@desales.edu.