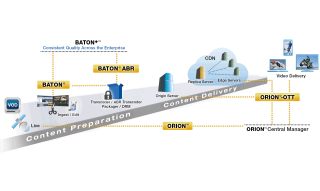 LAS VEGAS—The 2020 NAB Show will serve as an opportunity for Interra Systems to demonstrate its range of content quality control, monitoring, analysis and classification technology for the management and analysis of audio-video quality. The gear on display will show support for tasks that include lip syncing, speech-to-text caption alignment and content classification.

At the forefront of Interra Systems’ technology, and its 2020 NAB Show presentation, is its OTT solution that features Baton QC and the Orion monitoring suite. During the show, Interra will demonstrate how users can manage advanced quality control, ABR and HTTP checks for large volumes of VoD, live and linear monitoring of each stream from content creation to delivery.

Interra’s Baton technology has a number of new features set to be showcased during the show. One is Baton Captions, which assists with the creation, management and delivery of captions for traditional TV, DVDs and streaming with machine learning and automatic speech recognition technology. There is also Baton LipSync, an automated tool for lip sync detection and verification that uses machine learning tech and deep neural networks to automatically detect audio and video sync errors.

Some updates to other Baton aspects are also on tap, including boosts in IMF and HDC checks, usability and audio language detection. There is also a range of new audio-video checks and support for the latest formats, as well as Interra’s subscription-based service for automated quality control of file-based content. In addition, an updated version of the Baton Media Player will be displayed, featuring support to overlay timecode information on video, performance enhancements in J2K playback, an option to export a video clip without re-encoding, improvements in real-time playback and support for playback of growing Material eXchange Format.

A number of new features for the Orion suite also will get prominent attention at Interra’s booth. Interra has Orion-OTT for VoD and live-event streaming monitoring. Simply labeled Orion, this system works for IP-based delivery infrastructures as a real-time content monitoring platform that offers video analysis of linear channels. Then there is the Orion Central Manager for end-to-end monitoring of channels that now provides an aggregated view of linear and OTT services based on monitoring data collected by Orion and Orion-OTT.

Additional technology that will be at Interra’s NAB Show booth includes Winnow, a system for content classification and identification powered by AI/ML technologies; and the Vega Media Analyzer, an analysis platform for standards compliance, debugging and in-depth analysis of encoded streams that has new updates to support AV1, JPEG and ABR streams.

Interra Systems will be located at booth SU5510 during the 2020 NAB Show, which takes place from April 18-22 in Las Vegas.