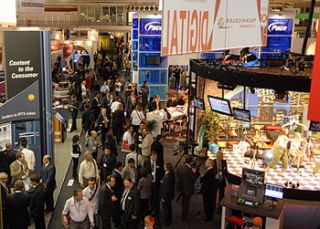 The annual IBC show finished up in Amsterdam this week with a record-setting number of attendees who browsed the aisles of exhibits and took in numerous conferences showcasing technologies in 3D, mobile TV, HDTV, IPTV and digital cinema.

More than 47,000 visitors had passed through the gates of the RAI conference centre by the time the six-day event wrapped up on Sept. 16. When the show began, the world's financial outlook was fragile but steady; however, it was a vastly different and more ominous marketplace by the time they headed out of The Netherlands.

Nevertheless, while exhibitors and delegates to the show carefully monitored the fast- changing economic news, they celebrated and debated the opportunities that are revolutionizing the worlds of television, broadband and film.

3D played a prominent role at the show, which marked a technology first when it aired an interview with Dreamworks SKG CEO Jeffrey Katzenberg in the world's first live 3D transatlantic transmission. The interview was photographed on multicamera stereoscopic equipment from 3Ality Digital and packaged for delivery by satellite service company Arqiva to Amsterdam. The interview was highlighted by Katzenberg's acceptance of the 2008 IBC International Honour for Excellence, the show's highest recognition.

IBC announced a record 47,000-plus visitors and more than 1,300 exhibitors from around the world attended IBC2008. Katzenberg emphasized the importance Hollywood is placing on 3D, predicting that all future Dreamworks SKG films would be produced in 3D. He also noted that his company is working with Luxxotica, the world's largest eyeglass company and Oakley, a sunglasses company whose founder developed the RED ONE camera, to develop "transition" lenses that would allow sunglasses to be used for 3D as well.

The show also honored 3D when it awarded the top prize at the IBC Innovation Awards to Disney's "Hannah Montana & Miley Cyrus: Best of Both Worlds Concert."

The next generation of HDTV was highlighted by the return of NHK's Super Hi-Vision demonstration, which attracted long queues at its theatre during its five-day showing. Super Hi-Vision provides 7680 pixels on 4320 lines and was accompanied by an immersive 22.2 channel surround sound system. This year, the ultra-high resolution pictures were shown from a local source as well as from a live camera via fibre in London and from a server in Torino using two satellite transponders.

The mood on the show floor was generally upbeat. There were few groundbreaking technologies, but most companies were busy positioning themselves for either the next big technology or market. Numerous "zones" defined by technology themes, such as mobile TV and IPTV, were popular destinations.

Thomson emphasized its place as a market leader in sports production, holding its press conference in the massive Amsterdam arena, which holds more than 51,000. The company announced the release of the LDK 8300 HD Super SloMo camera, featuring Thomson's patented AnyLight flicker reduction technology.

JVC emerged from its majority ownership from Panasonic, by announcing that it would support the rival to Panasonic's P2 tapeless format, Sony's XDCAM EX MPEG-2 professional video file format and SxS (S-By-S) solid state flash memory cards. The company noted, however, that it would continue to emphasize its development and support of the HDV format.

While it continued to shun the formal show floor booth format, Panasonic's presence was felt in many areas of the show as the company showcased its AVC-Intra format and set up shop immediately outside the NHK Super Hi-Vision theatre, highlighting its digital cinema technology.

Avid, another company that had been absent from the exhibit floor for several years, made sure it didn't do a trade show no-show two-fer in 2008 by hosting a small but crowded booth on the IBC show floor. New Avid executives, who continued to tout the company's emphasis on improved customer relations, were mum on whether they would return to the NAB Show in 2009, but added that the decision to skip this year's Vegas extravaganza was made by former executives no longer in charge.