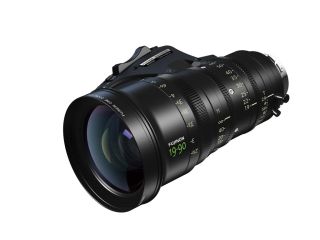 WAYNE, N.J. -- Fujifilm North America Optical Devices Division announced the first deliveries of its Fujinon PL 19-90 Cabrio ZK4.7x19 lens to video rental companies SIM Digital and AbelCine. The Cabrio lens was first introduced at NAB 2012 and is part of the company’s Premier PL Mount Zoom family. The lightweight and compact ZK4.7x19 features a detachable servo drive unit that makes it suitable for use as a standard cine PL lens or as an ENG-style lens.

Toronto-based SIM Digital ordered 14 Cabrio lenses post-NAB, and received their first shipment in August. A long time Fujinon lens user, Sim Digital has been acquiring lenses from the company for 30 years and owns hundreds of them.

“The focal length of the lens and the ability to use it in an ENG scenario is ideal for shooting episodic television, feature films, and other multiple camera environments. It offers great speed for a zoom lens,” said Rob Sim, founder and president of Sim Digital. “We’ve received eight Cabrio lenses so far, which were immediately rented and have been continually used without any issues. There’s been a lot of interest in the lenses, and we anticipate them to be utilized for many upcoming projects.”

SIM Digital has rented its Cabrio lenses for use in productions such as “Rookie Blue,” a Canadian police drama television series, and new episodic television show, “Beauty and the Beast.”

New York-based equipment reseller and rental company AbelCine was also one of the first to place an order for the Fujinon Cabrio lenses immediately following their introduction earlier this year. The company purchased a large number of lenses and has received delivery of dozens of them thus far.

The PL 19-90 lens covers a 31.5mm sensor size on a digital cinema-style camera, and features flange focal distance adjustment, macro function, a Lens Data System and /i metadata compatibility. It has a 19-90mm focal range at 2.7 kilograms, including servo motors.