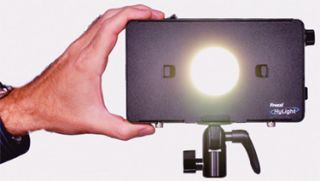 CORAM, N.Y.: Traveling the world as a director of photography and freelance cameraman for nearly 25 years has given me the opportunity to shoot thousands of diverse projects, including presidential inaugurations, major sporting events, documentaries, and national commercials.

The Frezzi HyLight There have been many changes in the production world in the past few years, and one of these is trying to maintain a high-end look with shrinking budgets and airline baggage allowances.

Several years ago, I was excited by the entrance of professional LED lighting instruments with their small size, low-power consumption, and reduced heat. I invested in several LED fixtures, but unfortunately the quality of light wasn't that good. There are several issues that may not be initially apparent when using LEDs, including a lack of flatness across the visible spectrum. Some companies addressed this with bi-color LEDs, and while this may appear to be a good fix, it opens up another issue—bi-color multiple shadows. Another problem is color fringing—most of the time you get a brownish tint caused by the light traveling through plastic sides of individual LEDs.

Until recently, these issues have kept me from using LED fixtures when I needed flattering and controllable light. I was recently invited to test a new Frezzi LED light that addressed many of the problems I'd encountered. I've used the Frezzi HyLight under a variety of conditions and am truly impressed. Now it's the only LED lighting system I travel with.

The HyLight was designed to produce the most flattering and best quality light; not just a high output. It also eliminates multiple shadows and color fringing. The weather-resistant HyLight is based on a 24 Watt single-element module in a sturdy metal enclosure built to withstand the rigors of field production. And it's a true point-source light. If I need a softer light, it's easy to clip some diffusion on the barn doors.

The LED element has a high color rendering index with a very flat output across the visible spectrum, and is easily color corrected to various lighting conditions with included gels. A built-in dimmer provides adjustment from 0 to 100 percent with practically no color shift. The unit produces the same amount of light as a conventional 100 Watt fixture while consuming only 24 Watts. This allows battery operation for more than four hours. Its size and 1.2 pound weight allow me to put a full three-point lighting kit in a small carry-on style case.

The HyLight can be mounted on a 5/8-inch stand mount and used with AC power, or Snap-on or V-mount batteries. The lights are so small that I don't need to carry around heavy-duty stands. The lightweight stands in the kit are all I need in most situations.

As the HyLights provide a point source, it's easy to control and even create patterns with barn doors and "cookies."

One of the most important things that a freelancer has is their reputation. I have to depend on my equipment and can't afford gear that breaks easily or doesn't withstand travel and field production. I'm thrilled with my new Frezzi HyLights and look forward to using them for many years to come.

Rick Smosky is a freelance cameraman and director of photography and can be reached at ricksmosky@gmail.com.