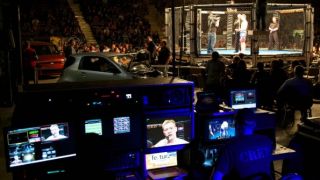 Feature Productions, a live production company based in Lethbridge, Alberta, Canada, is using Broadcast Pix Slate 1000 Video Control Centers as part of two portable production flypacks for live coverage of Mixed Martial Arts (MMA) matches and other events. The company had been renting a Slate-equipped flypack since 2009, but began using its own flypack in late May.

In southern Alberta, Feature Productions has gained a reputation for MMA video production and now works with four different MMA affiliations. The company was originally hired to provide image magnification (I-MAG) — featuring live coverage, instant replays, graphics and commercials — to on-site audiences. However, event promoters took notice of the HD productions and began offering them to broadcasters. Some matches are also streamed to GoFightLive, an online pay-per-view service.

Important selling points were Slate’s built-in clip store, CG, multiviewer and other Fluent workflow tools, which improve production efficiencies and minimize additional components in the flypacks. For example, the Future Productions rarely uses a USB stick to transfer files. Instead, it relies on Fluent Watch-Folders, which allow operators to insert commercials and other elements into a program over the network, even in the middle of a live production.

About 80 percent of the company’s business is live production. Beyond MMA, Feature Productions produces corporate events, conferences and Western Major Baseball League (WMBL) coverage. Currently in the second year of a three-year contract, Feature Productions also handles video scoreboard productions for the ENMAX Centre in Lethbridge. Home of the Western Hockey League (WHL) Lethbridge Hurricanes and host to a number of concerts and other events, the venue features a control room built around a Broadcast Pix Granite 2000.