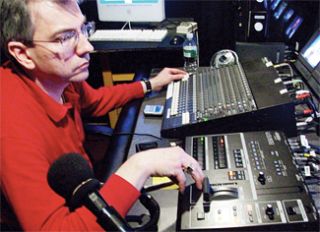 Ernie Baulder, a Cheshire TV technician, switches with the new Edirol LVS-800.
KEENE, N.H.
Cheshire TV is a non-profit company which manages a public, educational and government access channel that serves 30,000 households in the southwestern New Hampshire cities of Keene, Marlborough and Swanzey.

As there’s no local television network affiliate within 60 miles, Cheshire TV provides the only local television service for most people within those communities. The operation was launched in 2006, and has tripled its capacity and output to the point that we’re now producing more than 15 shows per week.

We produce a wide variety of programs, including local issue talk shows, sports, music, live entertainment, as well as local government and school board meetings and large-scale live outdoor special events—we cover it all.

Since our launch, Cheshire TV has undergone a major renovation in order to accommodate an increasing demand for programming and services. As part of this expansion, we purchased and installed an Edirol LVS-800 Video Mix/Live Switcher for our studio live and live-to-tape productions.

When we began shopping for a new switcher, we were specifically looking for a six-input model with downstream keying and portability. Also, our budget had us looking for a switcher with a price point of less than $5,000. The Edirol LVS-800 met all of these requirements, and had additional inputs and great layout to boot. It’s very rugged and features monitor outputs and a built-in scan converter, all for much less than we were planning to spend.

As our control room affords a working space of only 55 square feet, the compact size of the new Edirol switcher is especially prized. It takes up less than half the space that our previous switcher occupied. Also, when the installation was performed, we configured things so that the LVS-800 could be removed and used for remote live and live-to-tape production work out of house.

The installation of the LVS-800 production switcher has improved and simplified the way that we do things at Cheshire TV. As a public access station it’s important that our equipment be easy to learn and use for non-professionals, while still providing the features that they expect.

Our previous switcher lacked a downstream key function, and was limited to only four input sources. And we had to use one of those inputs for on-screen graphics, reducing our input capability to just three sources. It’s easy to imagine that this was a real problem for any of our productions requiring playback of video, or switching of signals from more than three cameras, which we do quite often. The Edirol LVS-800 switcher not only doubled our input source count, but has also dramatically improved our image quality.

We’re had our Edirol LVS-800 production switcher now for three months and are really thrilled with it. We can’t wait to get another one for our portable field kit. We’ve found that nothing else compares at this price point or the kind of performance and versatility that this switcher provides. Overall, we’re very pleased with our acquisition.

Lee Perkins has been the executive director/manager for Cheshire TV since its inception in 2006. He may be contacted atlperkins@cheshiretv.org.

For additional information, contact the Roland Systems Group at 800-380-2580 or visitwww.rolandsystemsgroup.com.