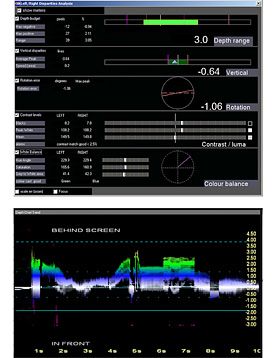 Celsoft Left-right disparities analysis and (below) Depth chart trend displays on Cel-Scope3D
At this year’s NAB Show, Cel-Soft will launch version 2.0 of its Cel-Scope 3D stereoscopic analyzer, a quality control tool in partnership with its USA distributor, Leader Instruments.It can be coupled via a capture card to systems like SGO's Mistika, Quantel's Pablo, or Blackmagic Design's DaVinci Resolve, or operate as a stand-alone solution when checking 3D media files particularly with the logging option.

Footage and edits in many file formats can be viewed and assessed in real time. Disparities are analyzed and displayed as clear and intelligible graphics and viewed on 2D or 3D monitors. It adds easy-to-read graphical disparity scales for common parameters such as depth range, rotation errors, vertical miss-matches and luminance imbalances.

Cel-Scope offers over 60 different multiple display modes, including a depth spectrogram that enables operators to see if the 3D is approaching acceptable limits or if there are issues based on a timeline history.