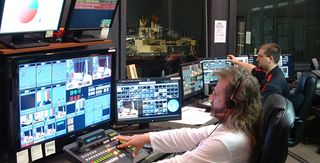 BILLERICA, MASS.: Broadcast Pix today announced that Frost Cutlery is using a Slate 1000 Video Control Center to produce 16 hours of live programming each week to sell its extensive catalog of products, as well as a Slate Desktop to handle master control. Based in Chattanooga, Tenn., Frost Cutlery offers a variety of knives, swords, and kitchen cutlery, as well as other collectibles.

“Cutlery Corner Network” is a four-camera studio production using two Panasonic cameras on pedestals, one on a jib, and one handheld. Frost intends to add a Steadicam unit in the near future. Frost Media Group went live with its Broadcast Pix systems in July 2010 and purchased them from Encore Broadcast Solutions in Chattanooga.

Frost has a unique setup, with its Slate 1000 and Slate Desktop installed next to each other in the control room for redundancy. Using a built-in failsafe feature, the Slate 1000 feeds master control on Input 1. If master control goes down, it defaults automatically to the production switcher. Conversely, if the Slate 1000 fails, the Slate Desktop is configured to switch the show live, and the director can continue switching the show by literally sliding his chair to the right.