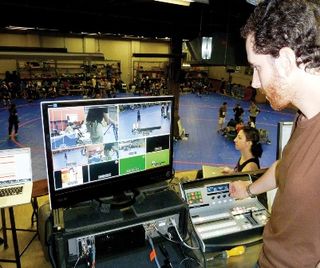 NEW YORK—The New York City’s Gotham Girls Roller Derby has become one of the world’s most successful roller derby leagues. A big reason for this is the excitement fans experience when attending the live bouts, as well as the availability of live streaming of these events and their later rebroadcast over the air.

My job is to help extend the excitement of the Gotham Girls events to people who can’t make it to the arena. We produce a high-quality video pickup of the matches, along with live streaming to the Web. Our coverage includes multicamera shoots and in-game graphics, along with scoring, player and league stats. All of this is edited together after the match is finished and made ready to air in a television broadcast the week following the match.

RELIANCE ON MULTIPLE PRODUCTS
To produce this coverage, we rely on Blackmagic Design’s Atem production switcher and a number of other Blackmagic products, including their Atem broadcast control panel, HDMI to SDI mini-converters, and Intensity Shuttle Thunderbolt technology capture and playback devices. The Atem 1 M/E switcher is used for all live switching at the events and to help create a basic line edit for rebroadcast. This dramatically improves our editing and finishing time during the week. Audio and video from as many as five SDI or HDMI cameras is handled by the Atem, with other inputs used for playback and graphics.

Franklin Zitter We capture directly from the Atem into Final Cut Pro running on an i7 Mac Mini using Intensity Extreme. As the product is Thunderbolt-based, the process is incredibly fast. A separate Mac Mini and Thunderbolt-based Intensity Extreme running Telestream’s Wirecast is used to handle the live streaming, as well as run the Atem software controller that we use to configure the switcher and load graphics before events.

The combination of switching and graphics in a single system is a big plus for us. It provides us with graphic overlays and transitions, while also allowing us to feed out onscreen graphics from our Rinxter third-party custom stats software. And the whole operation is simple for our operators to set up, as the Atem switcher has both downstream and upstream keying capability. And if need be, I can also simultaneously play back pre-recorded video content from Final Cut Pro, via a Mac Mini running HDMI into the Atem.

EDITING MADE EASY
After each roller derby match, we have about a week to get the show ready for its rebroadcast. As we record the Atem’s output directly into Final Cut Pro (again using Intensity Extreme), the editing process is very easy. The footage is already in the Apple Pro Res codec and ready to go. And as we’ve become very adept at running a tight and professional live show events with the Atem, adding new graphics, player profiles or small shot corrections is generally all that is needed to assemble the program rebroadcast.

The ability to provide high-quality live event broadcast coverage has really helped us drive fan growth for the Gotham Girls team, and having a video production switcher that’s as powerful as the Atem has played a huge part in this success story.

Franklin Zitter is technical director and producer for television coverage of the Gotham Girls Roller Derby. He may be contacted at franklin+ggrd@flickerlab.com.
For additional information, contact Blackmagic Design at 408-954-0500 or visit www.blackmagic-design.com.