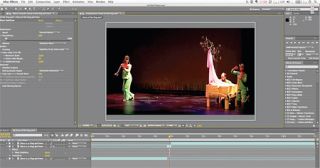 Breaking with their corporate tradition of releasing a major Creative Suite update every two years, Adobe has released a mid-cycle product, Creative Suite 5.5. This contains significant new features and improvements that should be of vital interest to all media creators. In this review, we will look at the new features in Production Premium 5.5, a subset of the entire Creative Suite, which consists of Premiere Pro CS5.5, After Effects CS5.5, Audition CS5.5, Photoshop CS5 Extended, Flash Catalyst CS 5.5, Flash Professional CS5.5, Illustrator CS5, OnLocation CS5, Encore CS5, Dynamic Link, Bridge CS5, Device Central CS5.5, and Media Encoder CS5.5. And considering the huge mass of software even this subset contains, we will concentrate on changes and improvements to the tools of most interest to editors, FX artists, and media producers at large: Premiere Pro, After Effects, Audition, and Media Encoder.

Premiere Pro CS 5.5 is a full-featured NLE that has been gaining favor among editors for its robust toolset, ability to play any format and codec without transcoding, and tight integration with other applications in the Suite through Dynamic Link. New features in this release include greatly improved Mercury Playback Engine optimization (which, on a system equipped with an NVIDIAGPU, allows for real-time playback of even heavy sequences of effects without rendering); keyboard shortcut presets which allow the application to be driven by the same keystrokes as Final Cut Pro, Avid, or even an editor's customized set; Merge Clips (a feature designed in support of dual audio system recording, which allows for up to 16 audio clips to be synced to a single video clip using in-point, out-point, timecode, or numbered markers as the reference).

You can also expect to find greatly expanded Metadata support and integration (which provides the capability for speech recognition and search, the ability to use a script to move sequences and assets through the entire production workflow using Adobe Story).

After Effects CS 5.5, the venerable motion graphics, compositing, and special effects app, has also seen some significant improvements. First and foremost is Warp Stabilizer. This tool is nothing short of an amazing accomplishment—an image stabilizer that works its magic in the background (so you can continue working in After Effects while it processes), by analyzing the position of all pixels and then applying the chosen stabilizing methods and parameters. While the results obtained from many other stabilizers are often found only through experimentation, Warp Stabilizer smooths motion, jitters, bumps, and shakes and produces acceptable (and better) results, from such pertubations as natural camera motion, with little to no intervention. Another major addition is a new Camera Lens Blur tool. This plug-in effect lets you control bokeh, depth-of-field, and rack focus by adjusting the iris shape, blade curvature, and diffraction characteristics. In addition, you can now control how the light falls away in a 3D scene, to better emulate real-world lighting behavior. Timecode from source clips can now be accessed directly within After Effects, making it easier to coordinate with the clips in Premiere Pro. There is also a whole bag of tools that can be used for 3D projects.

Audition is a new addition to the Creative Suite family is a multitrack editor packed with many excellent tools that are often needed in audio-for-video post production. It features native spectral display and repair, de-hummer, de-clicker, de-noise, 5.1 multi-channel editing, metering, and mixing, and very tight integration with Premiere Pro via round trip editing. Audition can open and save all manner of files, including OMF and XML. As a bonus, Audition comes with access to a large library of professional sound effects, Resource Central, which can be previewed and downloaded as needed.

Media Encoder, in my opinion, is the hidden gem of the Creative Suite. It's a batch encoder with presets for just about any screen you need to deliver to, and any codec and format. It has the ability to easily create and save presets for those inevitable oddities you will no doubt have to create. It sports a three-pane interface: Queue on top (with progress bar), current encode with a preview window and progress bar in the middle, and Watch Folder at the bottom. Media Encoder can accept files for processing by simple drag and drop, or by watching a specified folder for newly added assets and adding them to the queue to produce any preset outputs you have specified. Media Encoder is optimized for speed, and while it will happily work in the background, it will take up as much of the available RAM it can.

Historically, developers have taken two approaches toward the presentation of "edit suites." One has been to provide a grab bag of apps, even insanely great apps, that comprise all the tools needed to accomplish the tasks at hand. The second has been to package a truly integrated suite of applications that work together and function similarly to accomplish those tasks, through intercommunication and the seamless movement and live linking of files between apps without rendering and exporting until the very end, the output, of the process. The Production Premium, and the entire Creative Suite, falls squarely into the latter category, and, in many ways, is helping define how an integrated suite should operate. For example, chapter marks set in Premiere Pro during an edit are carried through Media Encoder and placed into Encore for DVD authoring. There are many more examples.

Since many of the real-time playback and effects features, as well as rendering and encoding, are based on graphics processing unit (GPU)-accelerated features built on NVIDIA CUDA, one of the biggest productivity boosts you can give to the performance of Creative Suite is through the installation and configuration of an approved NVIDIA GPU card to boost the Mercury Playback Engine.

The MPE-approved card list has been expanded in this release to include a larger number and selection of NVIDIA geForce and Quadro cards, including more for laptops. (For this review, I used a Quadro 4000 for Mac, replacing the stock GPU in my MacPro, and after setting the MPE options in Premiere Pro, I saw really dramatic increases in speed and real-time playback. This approach yielded real-time playback of multiple HD layers with filters enabled, and a 4x rendering boost over a non-accelerated system. This kind of speed boost makes all the difference between a system that gets by and one that flows closer to the speed of thought.)

I used many components of the Production Premium on a recent concert series shoot consisting of three two-hour concerts. Three cameras were employed and there was limited turnaround time. And I should add that there was no budget, as the concerts were a benefit for the victims of the hurricane and flood that recently struck my home area. An efficient workflow was absolutely necessary to turn this topical event into saleable DVDs quickly, and to save my sanity.

I used Premiere Pro as the front end for the edits—to organize, prepare, and select footage from my Sony EX3 and the two Canon AVCHD cameras used to shoot the shows. One of the great things about Premiere, as mentioned above, is that you can put any kind of footage into it and it will play in real time without rendering. My workstation is connected to an AJA Kona 3 I/O card, which interfaces nicely with all the elements of the Suite. Thanks to that connection, I was able to select and render only the footage I needed, rather than everything that was shot, while doing a preliminary color correction pass out of Premiere Pro up front. I was also able to fix the few clipped audio moments before exporting out of Premiere Pro by round tripping to Audition.

Once the edit was completed inside my habitual NLE, Media 100, I exported the shows by XML to After Effects for some fancy title creation and final color grading corrections. Media Encoder rendered the resulting sequences to DVD format, and a quick authoring job completed the project. The only slowdown was the learning curve in getting used to Premiere Pro's interface, which was greatly sped up by using the Final Cut keyboard map for shortcuts and referring to Richard Harrington's excellent guide, "Premiere Pro for Editors."

All in all, the Production Premium package is a great deal—a tightly integrated suite of tools, which are very fast and efficient, and cover all of your media production needs. The addition of a CUDA-supported graphics board, such as the NVIDIA Quadro 4000, for enabling the benefits of the Mercury Playback Engine, turns the Production Premium into a screaming workstation that can dramatically reduce production times and vastly increase productivity.