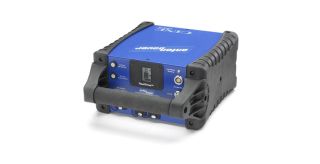 BEVERLY HILLS, CALIF. -- Anton/Bauer says its Cine VCLX Portable Power System has been honored with a Scientific and Engineering Award from the Academy of Motion Picture Arts and Sciences. Representatives from the company will accept this award at the annual Scientific and Technical Awards presentation on Saturday, Feb. 9, 2013. Anton/Bauer engineers Joe Murtha, William Frederick and Jim Markland have been recognized for their design and creation of the Cine VCLX.

The A.M.P.A.S. Scientific and Technical Awards honor technologies that contribute “significant value to the process of making motion pictures.” The Anton/Bauer team designed the Cine VCLX power system to provide extended run times and flexibility. The Cine VCLX series allows users to not only power cameras, but supplementary equipmen such as lighting. It accommodates 24V film, 14V video and 28V digital cinema equipment, plus all accessories. It features an LCD with real-time batteri life and a 15-minute warning.

“We could not be more pleased to have received such a distinguished honor for the Cine VCLX Portable Power System,” said Dan Fitzpatrick, general manager of Anton/Bauer. “Our engineering team consistently strives to create solutions that are specific to the needs of our end users. The Cine VCLX has become an industry standard, powerful enough to safely and reliably run cameras such as the ARRI Alexa for more than four hours, while also powering 200W HMI lights, LED panels and portable microwave units. There’s no greater stamp of approval than recognition from The Academy.”

Portions of the Scientific and Technical Awards presentation will be included in the telecast of the Academy Awards for outstanding film achievements of 2012 on Sunday, Feb. 24, 2013, from the Dolby Theatre at Hollywood & Highland Center, and televised live on the ABC Television Network. The Oscar presentation also will be televised live in more than 225 countries.