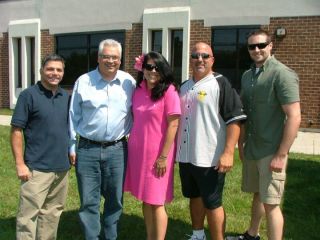 Anton/Bauer(r), part of Vitec Videocom, a Vitec Group company and a premier global provider of batteries, chargers, lighting and other mobile power systems for the professional broadcast, video and film industries, along with Autoscript, also part of Vitec Videocom and a Vitec Group company and employees from the Valley Cottage, NY, headquarters of Vitec Videocom U.S., recently hosted a fundraiser for The Hole in the Wall Gang Camp, raising $14,000 for the local children's charity founded by the late actor, Paul Newman.

Throughout the summer, employees of Anton/Bauer, Autoscript and Vitec Videocom U.S. hosted fundraisers for the charity, the headquarters of which are located nearby in Ashford, CT. Employees presented The Hole in the Wall Gang Camp with the final amount during the annual company picnic hosted by Anton/Bauer and Autoscript.

"We are very proud to support a local charity such as The Hole in the Wall Gang Camp," says Shin Minowa, vice president, sales and marketing, Anton/Bauer. "It is heartbreaking to hear of any child suffering from an illness, so to be able to support a program such as this, one that gives children the chance to be a kid and enjoy the outdoors, gives us hope for their futures."

The Hole in the Wall Gang Camp is dedicated to providing "a different kind of healing" to children and their families coping with cancer, sickle cell anemia and other serious illnesses through summer sessions and family weekend programs. The foundation serves more than 20,000 children and family members annually.

Anton/Bauer is recognized as the world's innovator and a premier provider of batteries, chargers, lighting and other key mobile power systems for the professional broadcast, video and film industries. Based in the United States in Shelton, CT with offices in Europe and Asia, Anton/Bauer was established in 1970 and has expanded its product offerings to include many signature lines such as its leading Gold Mount(r) system, InterActive(r) chargers and Logic Series(r) batteries such as the HyTRON(r) 50, 100 and 140, and DIONIC(r) 90, 160, HC and HCX. Their products are compatible with every camera brand on the market today. Other Anton/Bauer high performance products include the Ultralight(r) 2, ElipZ(r), CINE VCLX and the Tandem 150 Modular Charging System. Their superior-quality products have become an industry standard. For more information on Anton/Bauer, visit www.antonbauer.com.

Established in the UK in 1984, with headquarters in the US and the UK, Autoscript is the world leader in the prompting industry. Autoscript provides a complete range of teleprompters for PC and the i-Series, the best designed and built hardware, PC cards and software, and-with its expanding line of intuitive accessories-is the new definition in prompting. Autoscript is a member of the Vitec Group. For more information, visit www.autoscript.tv.

Vitec Videocom brings together some of the most respected, most innovative and most sought-after brands in the industry: Anton/Bauer, Autoscript, Litepanels, OConnor, Petrol, Sachtler, Vinten and Vinten Radamec. It acts as an endorsing brand for these market-leading broadcast, film and pro video products, encouraging multi-brand system sales and simplifying the way that customers worldwide do business.