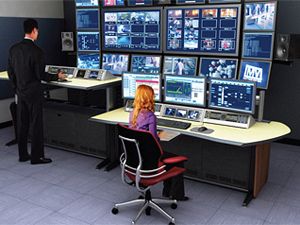 When I was starting out in the broadcasting business back in the 1960s, the “furniture” was all pretty much the same. Depending on which catalog you visited, you could get your 19-inch equipment racks and consoles in black or grey (or perhaps RCA’s “midnight blue”), and aside from a few standard height selections, and maybe a back door option or a louvered top, that was about it for the range of choices.

Even though we’re well into the 21st century, a lot of broadcast equipment is still manufactured to fit 19-inch racks, and your basic black and grey colors haven’t faded into obscurity the way certain automobile finish options have. However, there’s a lot of gear out there now that the folks in your granddad’s TV station wouldn’t recognize and it wouldn’t fit his 18-inch deep racks anyway.

Fortunately, several companies have kept pace with the new developments in monitors, computers, and the like that have become commonplace in broadcasting and production house environments, and have developed workstations, consoles, and mounting systems for the current generation of TV gear. Their products will be welrepresented at this year’s NAB Show.

Complete details were unavailable at press time, but Forecast Consoles is promising to show a brand new “green environmentally-sustainable product” that has been specifically designed for automated production control room (APCs), and which will feature an innovative new surface detail.

TBC Consoles will introduce ControlTrac, a fully height-adjustable broadcast control room console that provides operators with a full range of workstation height adjustment. Not only does the countertop move up and down at the operator’s commands, but also monitors, rack turrets and anything else mounted above the work surface. ControlTrac also allows large screen displays of up to 40-inches to be mounted directly to the console for the first time, eliminating the need for a separate monitor wall mount.

Winsted’s Ascend Sit/Stand model, a new addition to the company’s Prestige series of consoles, can be raised or lowered to accommodate the requirements of individual operators. It features work surfaces trimmed in Corian or other plastic laminates and the work surface can be adjusted from 29 to 45 inches above the floor. The Sit/Stand is equipped with three preset heights, but can be easily adjusted to any height within its range. Easily accessible vertical and horizontal wire and cable management options are available for the product. Winsted will also show two new products in their M View monitor wall line. The new units accommodate plasma or LCD flat screen monitors up to 64 inches when freestanding, and larger units when the M View wall is secured to a building wall or ceiling.