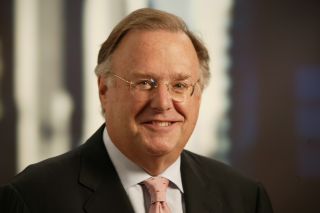 NEW YORK– David Barrett, President and CEO of Hearst Television Inc. since 2001, will be honored by the Broadcasters Foundation of America with the 2013 Golden Mike Award on Monday, Feb. 25, at the Plaza Hotel in New York City.

The gala at which the award will be presented will benefit the broadcasters in need, as stipulated by the mission of the Broadcasters Foundation, which is to improve the quality of life and maintain the personal dignity of professionals in the broadcast profession who find themselves in acute need. The organization provides aid to those who lost their livelihood through a catastrophic event, debilitating disease or unforeseen family tragedy.

“David has been a vigorous champion of the Foundation’s mission to help broadcasters who are in desperate need,” said Chairman of the Broadcasters Foundation Philip J. Lombardo.

In 1984, Barrett joined the company as general manager of the Hearst’s Baltimore radio stations, later assuming responsibility for the Hearst Radio Group and then for Baltimore’s WBAL-TV. In 1991, he was promoted to vice president of Hearst Corporation and deputy general manager of broadcasting.

“Broadcasting has been a rewarding career, allowing me to be a part of an industry that gives back to local communities across America,” noted Barrett.

Previously, he served on the board of directors of the National Association of Broadcasters, as well as its executive committee. He has also served on the boards of the FCC’s Media Security and Reliability Council, the International Radio and Television Society Foundation, the Advertising Council and Internet Broadcasting Systems, Inc. He is a past chairman of the board of governors for the ABC Television Affiliates Association.

Barrett is also a recipient of the First Amendment Leadership Award from The Radio Television Digital News Foundation, the DiGamma Kappa Distinguished Achievement Award in Broadcasting from the University of Georgia’s Grady College of Journalism (2001) and The Media Institute’s American Horizon Award (2005). Broadcasting & Cable named him “Broadcaster of the Year” in 2004 and inducted him into their Hall of Fame in 2008. He was also inducted into the National Academy of Television Arts and Sciences Management Hall of Fame.

For more information on the Broadcasters Foundation of America Golden Mike Award, or to make a donation, please visit www.broadcastersfoundation.org, call 212-373-8250 or email info@thebfoa.org.