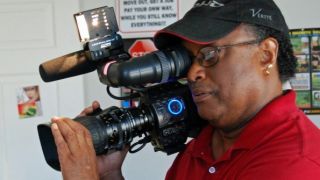 When Miller-Bell Media Productions was established in 1998, the company purchased two JVC GY-DV500 professional DV camcorders, which were eventually replaced by a JVC GY-DV5000. When the company decided to make the transition to HD production and adopt a direct to file-based workflow, Miller-Bell chose to stick with JVC and purchased a GY-HM710 ProHD camera.

Based in Lancaster, CA, Miller-Bell produces a variety of television commercials and infomercials, plus corporate and government video projects. For a shop like Miller-Bell, perception is everything — and a small camcorder simply does not provide the professional appearance required. While the GY-HM710 is smaller and lighter than earlier shoulder-mount models, its large lens and flip-out LCD screen makes a serious impression on clients.

When the company was a tape-based operation, it had a strict policy to never rewind footage in the field to avoid erasing content by mistake. The GY-HM710, however, records to inexpensive, non-proprietary SDHC media cards, so videographers can shoot footage and provide instant playback for clients.

Miller-Bell is also seeing operating cost savings with the use of SDHC cards. The company estimates it has saved close to $500 on tape this year. JVC’s native file recording does not require spending time transcoding footage for editing. Instead, it can drag and drop to Final Cut Pro.