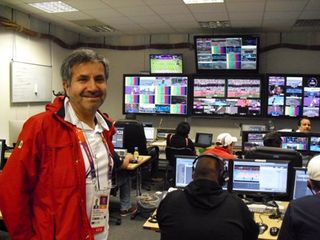 TV Azteca of Mexico is an example of one of the many smaller facilities in the International Broadcast Centre (IBC) in London, but it shares many technical features with larger broadcasters.

Azteca has been all HD and tapeless since starting down these paths at the World Cup in 2010, in South Africa.

“The use of servers is essential to our workflow, “ says Pedro Carmona Ortiz, Special Events Engineering Director for Azteca.

Azteca’s London facility is largely a collection point for the video and audio coming in from host broadcaster OBS. Azteca is also connected via fibre to a stand up studio in Westminster, a position located high on a hotel terrace with a background view of the city.

Although some programming is put together in Mexico, Azteca’s London space features several networked Final Cut Pro edit stations, EVS servers in production and playout roles, and an OBS EVS IPBrowse unit that is part of a subscription clips retrieval service.

This machine receives requested clips from OBS. “The ability to browse, and select only needed content saves money and saves time,” says Carmona. “The main benefit is that we are able to get material more quickly, and produce finished material quickly.”

Beyond the browse service, Azteca uses the basic features of both EVS’ IPDirector and IPEdit software. For example, material coming in from OBS can be viewed and manipulated as it is being ingested, something not possible with tape. IPEdit mostly plays a rough cut editing role at Azteca, while IPDirector helps track and access ingested content.

Carmona said the initial foray into tapeless before the South Africa event was a leap for some personnel, but they adapted and quickly found it easy to browse the content on the servers in lo-res and request needed hi-res clips.

“We wanted to use servers as an archiving and retrieving method that was very fast,” explains Carmona. He encouraged personnel to think of the workflow as being similar to an iPod: “It’s a place where you have digital content in an ordered list and you can access it easily, and there’s a playlist.” He said some had previously thought of the EVS as something obscure and complicated, and the realm of a specialized slo-mo operator. But once they tried it, it became easy to use.

The server infrastructure at Azteca included the OBS collection unit, where the host transferred requested hi-res clips, two units mainly used in production roles, and two for ingest and playout.

Carmona concludes that Azteca’s output just could not be done without the workflow and networking benefits of servers.

A server architecture--along with coming improvements in fibre optics multiplexing and encoding--is also key to what he sees as the next big thing in sport broadcasting: giving viewers at home control over the camera angles they are seeing on screen. “When all the cameras can be sent to the consumer it will be a big added value,” he said. “They can play with the content.”