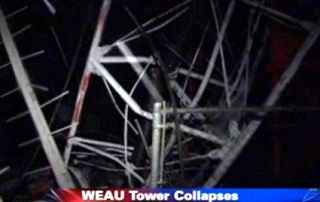 FAIRCHILD, WIS.: A 2,000-foot broadcast tower has come down in Central Wisconsin. WEAU-TV today reported that its tower located in Eau Claire County came down last night around 8:30 p.m. local time, during the station’s telecast of “The Biggest Loser.” WEAU is the Gray Television-owned NBC affiliate serving the Eau Claire market. The structure supports the TV station’s antenna as well as one for 104.5 WAXX-FM. Both are off the air. No one was reported to be injured when the structure came down.

Local media sources note that conditions at the time of the collapse were icy and windy, though not particularly severe compared to previous weather. A WEAU video showing the tangled wreckage of the tower shows a light dusting of snow falling. The cause of the collapse remains unknown.

“The tower, which stood 2,000 feet in eastern Eau Claire County is now only about 25 feet tall,” says a WEAU.com newscaster on the video. “A large portion of the structure feel in three different directions. . . we are working on alternative plans to bring NBC and local programming back to the Chippewa Valley and beyond.”

WEAU chief engineer, Ron Wiedemeier said he was on the way to the transmitter facility to see why the station had gone off the air, when he received a call from a fellow station engineer. The colleague told him the tower had collapsed.

“It just basically made me sick to my stomach,” he said, according to a WEAU report.

An official from the Fairchild Fire Department said the damage was limited to the tower, the transmitter building and the surrounding trees.

According to the Federal Communications Commission database, the guyed tower stood 593.5 meters above ground level, or 1,947.2 feet. Height above average terrain is 611 meters, or 2,004.6 feet. WEAU was registered to transmit at 29.9 kW ERP, and used a non-directional antenna from RCA. The transmitter site was located within the Canadian Border Zone.