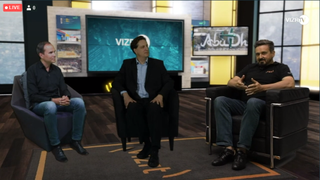 BERGEN, Norway—Vizrt pushed its online demonstration of what software-defined production coupled with IP transport over the internet can do during its weekly VizrTV webcast by bringing together live on a virtual set three people separated from one another by thousands of miles.

Chris Black, head of brand and content, at Vizrt in Bergen, Norway; Gerhard Lang, Vizrt CTO in Vomp, Austria; and Andrew Cross, president of R&D for the Vizrt Group, in San Antonio, went live June 10—each from his own green-screen studio.

To bring the three together, Matrox Monarch Edge encoders in San Antonio and Bergen converted video to SRT (Secure Reliable Transport) protocol IP streams, which were transported via the public internet to the studio in Vomp.

There, the recently announced Viz Engine 4.1 rendered the virtual set with Black, Cross and Lang keyed in using the Viz Engine's Fusion keyer, said Lang. The demonstration was similar to another the company made in early May. This week’s demo, however, included a third live participant some 4,000 miles away.

“You think we have some complex science fiction-type setup, but we really don’t,” said Cross, who noted the conventional nature of the green screen studio and the public internet connection be used to transport IP packets to Vomp.

“[B]efore this technology was available, you would have needed a dedicated line to get this quality of stream with the very low latency required here—from San Antonio back to Vomp or from Bergen to Vomp,” said Lang.

Instead, the demo relied on SRT protocol IP transport. “One of its strengths is it has encryption and can be used on [the] public internet with error correction as well,” he said. “So, we are really able to do that over any kind of line that connects your [Black’s] office, San Antonio’s office and our office.”

During the demonstration, Black asked Cross about using NDI (Network Device Interface) protocol. (In spring 2019, Vizrt acquired NewTek, where Cross was president and CTO and developed NDI.) The NDI protocol was in use moving video around the San Antonio studio before being encoded as SRT for transport to Vomp, Cross noted.

The use of both IP protocols helped to demonstrate the hybrid world in which video production today exists, he said. Lang added that the set up could have as easily included SMPTE ST 2110 protocol sources or SDI sources converted to IP with a gateway.

“Nothing should prevent you from using whatever format, whatever signal type, whatever cable type you want to use,” said Lang. “The power… in software-defined solutions is the flexibility and the ability to… output any kind of format to any kind of standard that has its place in the broadcast market.”

During the demo, each participant took a turn showing his native setup, including the green screen, before returning to the virtual studio view. Audio and video appeared to remain in sync throughout.

One difference between the demo of the virtual live interview and an in-person live interview was the slight pause between one participant asking a question and another answering—something viewers expect when, for instance, an anchor is speaking to a correspondent in the field, but would appear foreign when speaking to someone else in the studio.

Still, the demonstration successfully underscored what is possible when software-defined production, IP transport and the public internet are creatively combined. The next logical step is leveraging virtualization and the cloud.

While the Viz Engine is not new to virtualization, and this week’s demo “theoretically” could have been done in the cloud, there remains the issue of synchronizing in the cloud the tracking data from all of the cameras that makes it possible to seamlessly meld the real and virtual worlds, said Lang.

Among the most important takeaways from this week’s demo, said Cross, was showing the flexibility software brings to the production process. “I think a lot of people talk about cloud as being the thing. But it is not. Software affords the flexibility to produce your shows anywhere and then start bringing together all of the pieces you need to build out new shows, new workflows—and that’s the power,” he said.

“And it’s IP that connects all of this together to give us workflows and make shows in ways that we’ve just never been able to do before.”