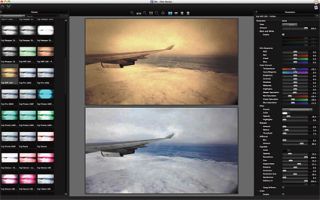 Some of the great things about this digital age are all the wonderful analogs. If that sounds a bit weird, bear with me for a moment.

Consider audio processing—racks of hard-wired physical equalizers, compressors, mixers, and effects units can be replaced by software plug-ins with remarkable fidelity, low cost, ease of use, and the look and feel of the original on which they were modeled. In some cases, the digital analog surpasses the original hardware. While they are not for everyone and every situation, modeled digital plug-ins have created a substantial place for themselves in the audio world.

Tiffen DFX v3 user interface A similar situation has been happening in the world of video production and post-production during the last few years. Effects, processes, and filters that used to require dedicated hardware have been modeled and otherwise simulated in software, allowing for lower cost and easier experimentation.

Tiffen has a long and highly regarded track record as a maker of optical filters for still image, video, and motion picture cameras, and has parlayed that background into a wide, deep, and highly flexible software package that can run as a standalone image and effects processing application, or as a plug-in for a wide variety of still image and video editing and effects applications. The latest iteration of this package, Tiffen Dfx v3, ups the stakes (and capabilities) considerably on this already extensive and impressive software.

Tiffen Dfx v3 contains about 125 individual filters with thousands of customizable presets built in. These filters include simulations of many of the best known and most used Tiffen glass filters (Pro-Mist, Diffusion/FX, Glimmerglass, grads, and more), specialized lens effects (including rack focus, depth of field, vignette, wide angle, and others), natural light and photographic effects (such as light streaks, rays, and rainbows, glows, day for night, and the like), optical lab processes (including bleach bypass and a wide variety of film stocks), film grain, and also color correction tools.

The application can be accessed as either a standalone or as a plug-in for photo apps (Lightroom, Aperture, Photoshop, and Photoshop Elements), or video apps (After Effects, Premiere Pro, Final Cut Pro 6 or 7, and Avid Editing Systems).

The user interface is simple, elegant, and dedicated to a streamlined and efficient workflow. It goes like this—load an image or movie (or apply the filter to one), select a filter category and then a filter, try presets, adjust filter parameters, apply one or more masks to control where the filter is applied, add additional filters as layers, save/render the image or movie.

The interface sports a large viewer area in the center for the image and variations. To the left are thumbnails for all the presets for the selected filter, and to the right are all the adjustable parameters. The opacity or degree of the filter effect can be set using a Layer Opacity control. New layers for further effects can be added and combined using the usual variety of blend modes.

There are a number of significant new additions to the latest version of Dfx v3. Some of the new filters are DeBand and DeBlock (for removing banding and compression artifacts while keeping fine detail), DeNoise, Glow Darks, Color Shadow (produces a high contrast image with a gradient overlay), KeyLight (relights the image quickly with either a directional or point light without computing scene geometry), Texture, Match (applies the color, detail, grain, and tone of one image to another), and Rays (volumetric lighting effects).

Additional new features include Gobo pattern and aspect ratio selection, irregular vignette shapes, the ability to read Camera RAW, Cineon, and DPX formats, as well as camera EXIF data, and the use of ICC profiles for still images.

As most of my work is with moving images, my main use of Tiffen Dfx v3 was inside After Effects. Installation and authorization were a snap—a fact that I especially appreciated after major difficulties with some other video and audio plug-ins. I used Dfx extensively in a recent music video project with all sorts of footage in all sorts of formats from all sorts of sources. This, however, is my most usual type of work.

After cutting the tracks in Media 100 (my main video editor), I brought the timeline into After Effects via XML (my usual method for color correction). As a plug-in, Dfx has essentially two parts: the plug-in interface inside the host application and the custom Dfx interface. The custom interface, which shows just one frame of the timeline, is where you go to select presets and saved favorites for that filter, and adjust parameters. Back inside the host interface, parameters can still be tweaked and levels adjusted. I wound up rather liking this two-step process, though it initially seemed needlessly confusing, due in large part to the fact that the trip between the host and the custom interface is nearly instantaneous.

The filters look lovely and do everything they promise. Working with them is very quick, thanks to the wide variety of presets, the ease in saving and retrieving new settings, and the speed at which they render. It seems, in retrospect, that the ease and speed of use contributed to my using Dfx in some ways I didn't expect to (which always seems to be a sign of a great and very useful piece of software). I fully expected to use some of these filters as I would have used their physical counterparts—grads, diffusion, ProMist—for light and image control, and a certain degree of "look."

I also expected to use Dfx to create some overall looks once I had all the clips in the project graded to a rough similarity via some of the film stock presets applied to an adjustment layer in After Effects. Both of those expectations were met with ease—easy application, easy experimentation, and easy adjustment. That was the ease of use that encouraged me to try a few things I ordinarily would not have taken the time to try. For example, it was very easy to strip all the color information away and experiment with multilayered tints and subtle bits of grain, and achieve a much nuanced look in a few moments that would have taken a lot longer to do by other means. The surprise results of experimentation, whether I use them or not, always point me in interesting and unexpected directions. The challenge is always in making and taking the time to experiment, and I always appreciate and admire software that allows and encourages me to do that.

Tiffen Dfx v3 filters are a huge asset in motion graphics and still image work, a wide set of high-quality creative tools and problem solvers that are very stable, easy to use, and a boon to inspiration. Depending on your application and focus of interest and use, any of the Dfx packages—standalone (for stills only), plug-ins for stills/photo, and plug-ins for video and film—are great value and can give great additional value to your productions.