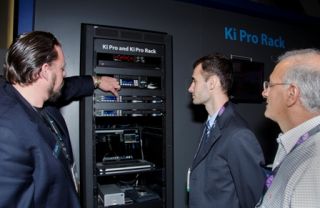 On the cusp of NAB, questions are asked: How can we improve workflows, share across platforms and store directly in the field? The show attempts to answer with new solutions that suggest ways to work, share and store in smarter, faster means. But the show floor poses as many questions as it answers: how effective is a camera-mountable recorder? What’s the benefit of a Blu-ray/hard drive combo deck? Should I invest in camera-to-edit technology? Some answers, below; though questions will undoubtedly beckon.

SERVERS & STORAGE
Abekas showcased the newest version of the Mira instant replay multichannel production server, which is available as a 4- or 8-channel device with either JPEG-2000 or DVCPRO recording hardware.

Newcomer Brevity came to NAB to introduce V3, a transcoding and transport server that moves securely encrypted files over Internet, fiber or satellite up to 30 times faster, the company said, with high-quality resolution.

Craig Schiller (L) with The Vitec Group asks Avi Gonshor for information about XFly, the new portable network attached storage platform by EVS.Bright Technologies showed off the newest generation of its BrightDrive servers, the Procyon and Triton.

Cache-A came to NAB to show the newest version of its Power-Cache archive server, which can control up to four LTO-5 drives and has LTFS capability to enable users to interchange content across different operating systems.

DVS showcased new features as part of the VENICE broadcast server, including a smaller 2RU chassis and support for various file formats. The company also showcased the SpycerBox as an integrated storage solution in both NAS and SAN environments.

EVS announced it had integrated the Sony XDCAM 422 50Mbps HD codec into XT3 and XS broadcast production servers. The company also showcased the latest developments to its EVS Sports360° solutions. For its XFly platform, the company introduced the XFly Streamer that offers simple and easy control of multiple isolated camera feeds recorded on EVS’ XT/XS series servers (including XT and XSnano) to be streamed simultaneously on a portable storage device.

Grass Valley touted new functionality for its K2 Summit 3G platform, including support for AVCHD and H.264 file playback, as well as proxy encoding that can be both recorded and streamed over a network.

Ravi Parthasarathy of Harmonic takes pride in showing off the company's MediaGrid 3.1 high-performance media storage. New enhancements were on display in the Orad booth, where the company showcased the PlayMaker sport replay server, which provides up to 8 I/O channels of ingest in multiple video formats.

Ross Video took NAB by storm with the BlackStorm, the company’s new two-channel playout server. Based on the DVCPRO HD codec, the server offers four hours of internal HD storage.

Attendees to the SeaChange booth saw a larger storage capacity as part of the Universal MediaLibrary storage system, as well as options for smaller scale storage within that same system. The company also launched the MSV1200XD video server, with features such as decreased power consumption, increased on-air reliability, and built-in flash SSD drives.

Sencore showcased the TSS 6000 transport stream server, a channel-in-a-box that works as a playout solution for single- and multichannel SD and HD as well as providing archiving features.

Enhancements were announced to the Wowza Media Server 3 by Wowza, which includes refinements to the DVR AddOn audio-only option for the Wowza transcoder, and improvements to the dynamic transcoder overlay.

A number of new solutions came from the Blackmagic Design booth, including the release of the new HyperDeck Studio Pro, an SSD recorder that features four channels of 3 Gbps SDI I/O, Thunderbolt I/O technology, as well as full HDMI and analog in and out including standard XLR connectors for audio and timecode. Other new options include the release of UltraStudio Express, a new capture and playback solution, and the availability of HyperDeck Software 3.0, an update to the HyperDeck recorder that adds support for Apple ProRes 422.

Doremi Labs introduced the LE100, a live broadcast receiver with recording capability. Live content can be recorded and saved as a digital cinema package (DCP). The company also showcased the NP100, a flexible audio video playback server that can natively play H.264, MPEG-2 or VC1 content and ingest most other available video formats.

In addition to celebrating 40 years in the business, For-A came to NAB to unveil its LTS-50 storage solution. The system uses a linear tape file system to record video on tape as files and enables the reading and writing of files from a PC via FTP. The LTS-50 can be controlled through For-A’s optional LTR Browser software.

A new combo deck in the form of a Blu-ray/hard drive solution was released by JVC. The SR-HD2500US has a built-in Blu-ray recorder and 500 GB hard drive with HD-SDI interface for compatibility with HD production switchers. The system can be used to create standard Blu-ray discs or DVDs from a variety of HD content sources, and gives users the option to record to the 500 GB hard drive or directly to Blu-ray disc.

Panasonic announced new solid-state recorder firmware for the AJ-HPD2500 and AJ-HPM200 recorders, which allows them to serve as a back-up playback device in a broadcast environment. The decks now feature the ability to write to a P2 card from an external server and PC via a network. The company also introduced the MicroP2 card and adaptor for solid-state memory cards.

New features for the PIX 220 and PIX 240 portable audio/video recorders from Sound Devices include new monitoring features that enable users to monitor images in varying exposures, support for analog and SDI/HDMI audio input combinations, and support for SD recording and playback.

Sony showed off its’ newly developed optical disc archive drive, the ODS-D55U, which can handle optical disc cartridges containing 12 discs. Users can connect the ODS-D55U easily via USB and use the ODS as a single large volume. The company also showcased the SR-D1 compact SRMemory drive unit for use with PC or Mac computers, as well as its SRMemory card family.