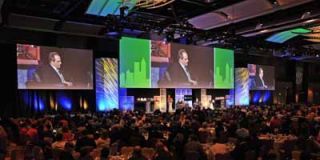 The luncheon included a preview of the next day’s SEC Championship Game between the Auburn Tigers and Missouri Tigers, including insights from the head coaches of both programs, while the dinner honored 14 former players that were named the SEC 2013 Football Legends Class in September. Both events were held in the same hotel ballroom and featured a three-camera setup. According to Preston MacIntyre, president, Spectrum Productions, all video clips and graphics were accessed from the Granite’s built-in clip server.

To create content for the main (and unusually sized) screen, graphic images were produced in Adobe After Effects as 3840x1080 images. A reverse anamorphic process compressed the images down to 1920x1080 resolution, which created “squished” images when played back through the Granite. The output from the Granite was fed into a Vista Systems Spyder x20 video processor, which re-created the original aspect ratio and flawlessly fed the blended image into two projectors.

Since Spectrum received its Granite X system in November, it has been used for both SEC events, the NASCAR 2013 Nationwide / Camping World Truck Series Awards Banquet in Miami Beach, Fla., and the Coalition to Salute American Heroes 2013 Road to Recovery Conference in Orlando, Fla. The company is headquartered in Atlanta, with offices in Miami, Orlando, Charlotte, N.C., and Las Vegas, Nev.