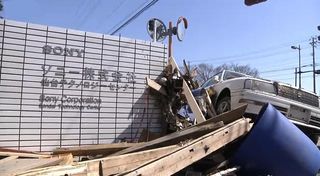 TOKYO: Sony this week said it had a plan in place to restart its Tagajyo plant. The Tagajyo facility is the only place where Sony’s HDCAM SR tape is produced. The tape is particularly popular for U.S. video post-production operations, which reported shrinking supplies immediately after the earthquake. The shortages provoked some operations to begin adopting file-based workflows. Sony said it expects to resume making magnetic videotape in Tagajyo toward the end of July.

Sony noted that operations had resumed at nine of the 10 manufacturing sites in Japan that had been shut down as a result of the earthquake, tsunami and the related power outages. The Tagajyo plant, located near Sendai in the Miyagi Prefecture, remains offline, but “plans are in place to resume its manufacturing operations,” the company said. Sendai was near ground zero for the giant tsunami wave that inundated Northern Japan after the earthquake. Flood waters were said to have inundated two floors of the plant. (The accompanying YouTube video shows the status of clean-up as of April 5, 2011.)

Sony said that other products and components made at the Tagajyo plant will be transferred to the core facilities that make those products elsewhere in Miyagi and in Fukushima and other prefectures, “to quickly restore full production capacity.”

Once operations are back on line at the Tagajyo plant, Sony said it “plans to coordinate with the appropriate local authorities to consider how the company can continue to assist with regional recovery efforts, for example by offering vacant building space at the Tagajyo plant to businesses in the area, and assigning employees to assist with local support activities.”

Operations were suspended at five of the plants in late March due to component shortages. Sony said it’s continuing to monitor “the availability of raw materials and components and endeavor to improve such availability.” They company is looking for alternative sources regarding any of its products affected by materials shortages.

“The company is continuing to evaluate the full impact of the earthquake, tsunami and related power outages, including the impact of these production level adjustments, on Sony’s businesses and consolidated financial results,” the company said.

See . . .
March 22, 2011: “Sony Suspends Operations in Five Plants Due to Shortages”
Sony today said it had to halt operations temporarily at five sites not directly affected by the March 11 earthquake and tsunami, due to raw material shortages.

March 17, 2011:“Supplies of Sony Videotape Running Low”
Users are reporting a shortage of HDCAM SR tape particularly, because there are no ready substitutes.