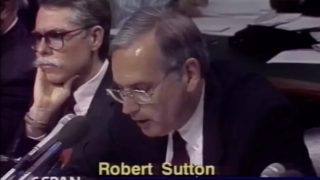 Robert Thomas "Bob" Sutton, a programmer and broadcast TV executive who then transitioned to such cable networks as Home Shopping Network and Golf Channel, died on June 7 at age 80. He lived in Tampa, Fla., and was a one-time president of the Tampa Chamber of Commerce.

As a biography provided to TV Technology's sister publication B+C demonstrates, Bob Sutton’s career had many dimensions both in the public and private sector.

A graduate of Michigan State, he started on the TV station side with management positions at the Evening News Association television stations in Detroit (WWJ-TV) and Mobile (WALA-TV), and the ABC O&O in New York City (WABC-TV), where he was a key figure in marketing the initial launch of the Eyewitness News format in the 1960s. He then moved to the network side as director of programming-East for NBC. From there he moved south to become general manager of WFLA-TV in Tampa and rose in the ranks to become president and CEO of Media General Broadcast Group. From there he transitioned to the cable industry as president of Home Shopping Network, a senior executive of the team that launched The Golf Channel and COO of Political Newstalk Network, also known as America’s Voice, a conservative news/talk cable channel that empowered political conservatives to participate in grass-roots lobbying efforts.

He received many academic honors, was a one-time president of the Tampa Chamber of Commerce, founder of Tampa’s Hall of Fame Football Bowl Game (now the Outback Bowl) and an instructor at the Army War College. He shared his broadcast knowledge, as a mentor, to many and helped them to advance their careers.

He is survived by his wife of 55 years, Claire; son, Blake; and daughter, Cory.

This story originally appeared on B+C.