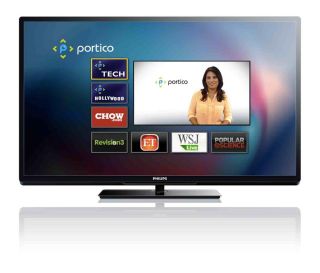 Net2TV is working with online TV programmers like Discovery’s Revision3, CBS Interactive’s CHOW.com and traditional print media brands, including WSJ Live from The Wall Street Journal and Bonnier’s Popular Science, to develop packaged shows running 30 or 60 minutes per episode. Programming is updated daily and new types of programming will be added in the future.

The Portico service is intended to be easy-to-navigate. When viewers select a category like Portico Tech, which features Revision 3 and Popular Science, or a stand-alone category like CHOW.com, the screen displays a video window highlighting new programming. The adjacent windows show video playing on branded channels, which can be transformed into full screen.

“Watching the living room TV, viewers have different expectations than when using a tablet or laptop. We create an experience for viewers who want to sit back, relax and watch,” said Jim Monroe, co-founder and senior vice president of programming for Net2TV. “Our program partners have good-quality, short-form pieces. We work with them to curate these pieces and package them into program-length shows.”

“Viewers appreciate that commercials help keep programming free, but commercial loads must be reasonable,” said Morgan of the ad-supported TV model he plans to implement, sharing revenue with media partners. “A sustainable advertising-based business model comes from balancing the needs of the advertiser with those of the viewer.”