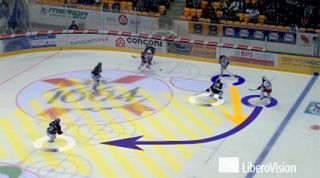 LiberoVision, which was acquired by Vizrt earlier this year, is now fully part of the Vizrt workflow and supports seven different sports, including soccer, American football and ice hockey. The company’s Libero Highlight one-box solution allows broadcasters to produce realistic 3D replays without the need for additional infrastructure.

“Based on nothing more than your existing TV images, Libero Highlight instantly grabs the viewer’s attention and lifts sports analysis to a whole new level,” says Julia Vogel, Sales and Marketing Director at LiberoVision. “LiberoVision’s patented image processing technology instantly transforms the camera feeds into realistic 3D representations that allow viewers to essentially fly over the playing field to review key moments in the action from the best possible perspectives.”

"LiberoVision is a great tool that better allows us to tell the story of the event,” says Sam Flood, Executive Producer, NBC Sports and VERSUS. “It provides a unique, tactical perspective that helps us take the audience inside the glass and gives them the best seat in the house.”

“LiberoVision’s realistic 3D support for analyzing key moments of the game, changing from one camera to another while always keeping the essential players clearly visible, is a great example of how broadcasters can now highlight game-changing decisions better than ever before,” says Paul Graham, VP and Executive Producer, TSN.