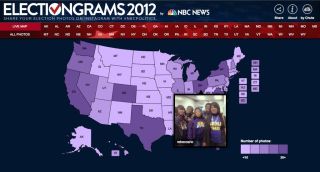 The site is powered by the Chute Media Platform, a “venture-funded, Y Combinator-backed, engineering-driven startup in San Francisco,” according to the company’s boilerplate. TNT, Saks Fifth Avenue, MetroPCS and House of Blues are listed among customers in addition to NBC News, which also tapped the start-up for Stormgrams, a storm-related photo site in the wake of Sandy.

Stormgrams resembles Chute’s own WeatherChute site, launched as a “personal project” because staff had so many loved ones in the New York area, according to The Next Web. WeatherChute curated photos hashtagged #Sandy—from Twitter and Instagram, mainly—and from direct uploads. WeatherChute was launched Oct. 30 and had 185,000 images within 24 hours. NBC News is now sponsoring WeatherChute.

With all of these websites, the homepage is a “heat map” showing which state has the most images posted. In the case of Electiongrams, some show fewer than 10 images. Arkansas, for example, had just one. NBC’s vice president of digital innovation, Ryan Osborn, told GigaOm that the sites are part of the organization’s larger effort to incorporate crowd-sourcing into the newsgathering process. He described them as an “early barometer” for the pros.