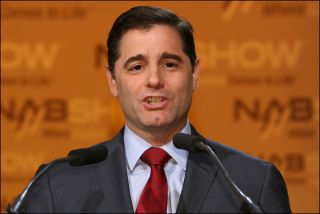 “The FCC is currently considering many political and regulatory issues that will have a lasting impact on the broadcast industry,” NAB President and CEO Gordon Smith said. “We look forward to hearing from Chairman Genachowski as he outlines his vision for communications policy and the opportunities for broadcasters in the fast-changing digital world.”

Since his selection by the Obama Administration in 2009, Genachowski’s walking orders have involved crafting a plan for a wireless nationwide broadband network. He delivered nearly a year ago with a proposal that 40 percent of the spectrum now devoted to broadcast TV be redesignated for broadband use. The National Broadband Plan outlined a scheme by which broadcasters who voluntary relinquished spectrum would receive a cut of the resulting auction proceeds. These incentive auctions would require Congressional authority. Sens. John Kerry (D-Mass.) and Olympia Snowe (R-Maine) introduced a bill to do so last week. (See, “Kerry, Snowe Intro Spectrum Inventory and Incentive Auction Bill.”)

Genachowski has frequently defended the spectrum reauthorization by invoking a “looming spectrum crisis.” During the Consumer Electronics Show in January, Genachowski predicted “disastrous consequences” if 500 MHz of spectrum were not reallocated for broadband by 2020.

The FCC has repeatedly stressed that any spectrum turnover by broadcasters would be voluntary. Genachowski himself showed up at last year’s NAB Show and said as much.

“These auctions are voluntary. Period. Participation is up to the licensee and no one else,” he said.

“The plan would give broadcasters the choice to contribute their licensed spectrum to the auction and participate in the upside,” he said. “The large majority of broadcasters may well be uninterested in this choice--and that is completely fine as far as the plan is concerned.”

Broadcasters are nonetheless uneasy with it. The unanswered elephant in the room is--what happens if the FCC doesn’t get the 120 MHz it seeks through voluntary means?