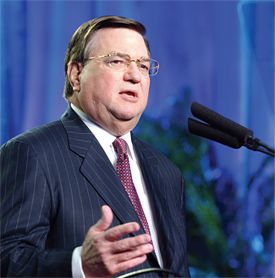 WASHINGTON—He negotiated must-carry, pushed through regulatory reform and helped facilitate the transition from analog to digital television broadcasting. For 23 years, Edward O. Fritts was at the helm of the National Association of Broadcasters, steering the organization from a modest-sized lobbying firm to one of the most powerful and influential lobbying organizations in Washington.

Eddie Fritts "Eddie helped put NAB on the map as an advocacy force in Washington," said current NAB President Gordon Smith, "and his accomplishments on behalf of radio and television stations—and the listeners and viewers that we serve—will be felt for decades to come."

After his tenure at NAB, Fritts founded The Fritts Group, a Washington boutique telecommunications lobbying firm that represents radio and TV clients. And at the NAB convention this year, he will be honored with the NAB Distinguished Service Award during the opening keynote in Las Vegas in April, which is given to members of the broadcast community who've made significant contributions to the industry.

TV TECHNOLOGY: What are the key issues broadcasters ought to have on their radar as they head into NAB?
FRITTS: The three principal issues, I think: retransmission consent, broadcast spectrum [issues] and performance royalty agreements for radio.

TVT: Some critics say NAB's lobbying prowess has diminished as broadcasters are having a tougher time making money in this economy. How would you respond to that?
FRITTS: I think that Gordon Smith is a breath of fresh air. He has a plan, and he's very effective. [The NAB] just had 600 grass roots broadcasters in town, and the benefit of [hearing from] 50 station broadcaster associations. Gordon and his team specifically work with station associations to make them true partners. And they in turn work with stations in their home states to make sure they become known and have a good relationship with their members of Congress. It's a grass roots system that few other industries have.

TVT: How does that grassroots effort go about benefiting broadcasting?
FRITTS: When he was president of the Motion Picture Association, Jack Valenti said to me, 'What's I envy about NAB's grass roots organization is that you have broadcast stations in every congressional district.' Those broadcasters are attuned to their hometown needs [and are in touch with] the city council, mayor, State Representative and Congressional members in the House and Senate. It's what makes a difference. You can have good arguments and sound positions, but if you don't have the right person in place, you'll end up coming up short. It's vital. The goal is to energize broadcasters because things in Washington are cyclical: You'll always have issues. The NAB was founded in 1922 on the issue of music copyright, and that's still an issue today. Many of these issues don't go away; they rise to a higher level.

TVT: Who are clients you lobby for and what are their priorities?
FRITTS: We're a boutique firm, so have a small client base but pay a lot of attention to those clients, including CBS corporate, radio and TV; News Corp; DirectTV; Motorola; Allbritton. For many of those clients, we're lobbying for the issues I mentioned earlier: retransmission consent, spectrum issues and performance royalty.

TVT: It has been said that Congress is a much less congenial place than it used to be and compromises are harder to come by. Are you finding this true as well?
Eddie Fritts was president/CEO of NAB from 1982 to 2006. FRITTS: Yes. It's unfortunate, but things change and times change. The [conversations] among different Republicans and Democrats and Independents have become more shrill. There are many members with good will who are still getting together and working the deals despite the rhetoric, but it seems to be more difficult overall.

TVT: Would you be interested in owning radio stations again?
FRITTS: I have spoken fondly about radio for some time. I actually tried to make a couple of deals in partnership with some other people, and so, technically, I own a tiny piece of several stations in the Midwest, but not enough to be directly involved in them. My son works in radio in Mississippi.

TVT: Do you occasionally talk with NAB President Gordon Smith to offer background or advice?
FRITTS: I worked with him on Congressional committees and in the Senate and we've been friends for substantial period of time. I enjoy working more closely with him, and we sometimes play a round of golf and sometimes have a background conversation or two.

TVT: What do you miss most about NAB?
FRITTS: I think the interaction with broadcasters across the country was very inspirational. Looking back, you have a slightly different perspective than when you were under the gun and needed to perform every week. I've had people in elevators thump me in the chest and say I had everything upside down and wrong, and others who've placed praise on me. I like the later better. There were far more accolades than criticism, at least in my face. I have really, really good memories of my time working at NAB and must say that the staff went out of their way to make me look good.