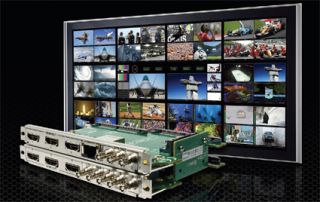 MELBOURNE, FLA.—Though it's a trend that's been talked about for years, the 2012 NAB Show may be one of the first shows to actually see technology catch up with the vision: creating and viably distributing content for multiple platforms. Gone are the days of creating content for a single purpose. The masses heading to NAB are certain to find that many companies are working to create a dedicated end-to-end workflow that addresses the multiplatform creation and delivery mantra from start to finish.

Harris is one firm doing just that. "Everything that we're doing has to do with multiformat content creation and multiplatform delivery," said Glodina Connan-Lostanlen, senior manager of strategic marketing for workflow, infrastructure and networking at Harris.

HView SX Pro multiviewer "[We're involved with] everything that has to do with life content combined with file-based content and hybrid infrastructure," she said. "And [the goal is to] create specific solutions for specific segments—[whether it be] in the OB/mobile production truck, in the news environment, in the distribution headend or for the contribution environment."

PUTTING IT ALL TOGETHER

Harris has hooked on to the notion that the industry is searching—simply enough put—for technologies that work together and deliver value. And certain arenas that have been the primary realm of a broadcast team, like the video headend back room, have become of interest to newcomers to the NAB convention, "those who are getting involved in one way or another to distribution via broadband on the Internet," Connan-Lostanlen said. "They have to get involved in the studio headend area," in a new way.

This year, Harris will introduce products that will smooth the introduction of these new technologies—such as a new multiviewer solution and new quality-control software solutions—to new markets.

"The challenge for us is to address the growing content and growing delivery mechanism but also growing base of customers who have different requirements," Connan-Lostanlen said. "One of the things that the traditional world has to teach to these newcomers is the importance of live content—how do you maintain a high-level of quality and reliability when you handle live content."

Another backroom solution that will be on display is the QuiC software family, a quality-control software tool that offers the ability to more simply analyze ingested files. The line is comprised of three products: QuiC Pro, designed for enterprise-level operations; QuiC Express for less-complex workflows; and QuiC View for visual presentation of digital content. The family of solutions can be used for after-content editing, during ingest, or for video transcoding and archiving transfers.

"This file-based analysis tool, QuiC, integrates with asset management portion as a heavy-hitting software for environments where a lot of files are being ingested," Connan-Lostanlen said.

For networking in the backroom, Harris will show new features within the Selenio media convergence platform for signal processing and compression. New features include a 10-bit encoder with multiple-generation features, a new video expansion module and a new MDX2 module for DVB-T2 broadcasters.

Glodina Connan-Lostanlen "When we launched Selenio last year, we proved we could reduce the space, power consumption, the cabling—a lot of things that translates into dollar savings," she said. "Everything we design now, we ask ourselves, 'how is it going to reduce complexity and reduce the cost of ownership?' With that comes ease of use and ease of installation."

Networking solutions by Harris get another tweak with new features as part of the NEXIO Station Suite, which is designed to help with the transition to tapeless studio production. Designed for multicamera studio productions, the system can be used to enhance control of video servers while simultaneously adding the benefit of working in a multichannel, nonlinear server-like environment.

Harris has also remained committed to its traditional broadcast core—and the solid centerpiece of any radio/TV broadcast facility, the transmitter—by showing improvements to its Maxiva UAX transmitter, a compact-class gap filler transmitter for ATSC mobile DTV broadcasting. The system allows television broadcasters to blanket coverage areas that aren't yet served by Mobile DTV penetration with a single box solution.

The goal is to "help overcome the challenges brought by the trends," Connan-Lostanlen said. "With telcos, houses of worship and sports facilities as they upgrade, it's forcing us to rethink the way we put products together. They want simple architecture, want power savings and we really need to sell them on total cost of ownership, which is different from the sale to broadcasters in the past.

"Everything is now pressed on budget, so that means we have to put our products and solutions together in a way that helps them with the bottom line," she said.