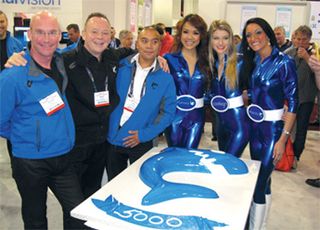 Speaking at the press conference, Haivision Executive Vice President Peter Maag detailed a newly announced collaboration with Zixi, whose technology is now built into Makito units. Among other things, said Maag, combined Makito/Zixi technology is being used by several clients for ENG newsgathering—primarily on remotes that lack ready access to traditional satellite or network services.

New for the NAB Show were the Kraken Enterprise and Kraken ISR low-latency, real-time transcoding systems. Maag said both formats provide a solution for getting live media content to any and all users at any time—and across multiple platforms.

The Enterprise is geared to large IP streams and converts them for mobile devices, PCs, or set-top boxes. The ISR is configured more for non-broadcast venues such as military intelligence, surveillance and MISP-compliant metadata applications.