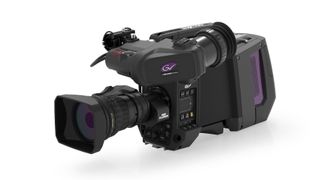 On the business side, the company revealed it was providing SMPTE ST 2110-based hardware and software for a new all-IP video production truck to be built for All Mobile Video, and that the acquisition of Grass Valley by Black Dragon Capital from Belden is expected to be completed during Q2.

Company President Tim Shoulders kicked off the press conference by expressing sympathy for anyone impacted by the COVID-19 pandemic and outlining steps Grass Valley has taken to meet customers’ needs during the crisis.

“We have protected our ability to support customers,” said Shoulders. “Ninety-five percent of our support calls can be performed remotely, and we’ve made significant investments in spare parts inventories over the past few years that are at the ready when needed.”

The company has also taken steps—such as offering free temporary licenses for products to customers working from home and discounts on spare parts and tech support—to help customers maintain business continuity, he said. Grass Valley has also created a series of webinars and training tools for the freelance community to hone skills while waiting for sports leagues to resume seasons.

Grass Valley, which derives about 45% of its revenue from the live sports media market, has seen the impact of postponing events on its business, Shoulders said. However, the company has continued to sign new business through the end of March.

All Mobile Video in New York City is relying on Grass Valley for its new end-to-end IP production truck, said Eric Duke, AMV president, who joined the press conference to discuss the vehicle.

“AMV has been planning to build an end-to-end IP-based mobile unit for several years now, but we didn’t want to design a truck with an interim IP solution, or only a partial IP solution,” said Duke.

The leadership Grass Valley has demonstrated in IP technology development for television production made selecting the company for the project “fairly easy,” he said.

Driving the decision to commit to an all-IP approach was the ability to future-proof the vehicle to technology changes. Doing so also allows AMV to be more cost-effective in terms of show design changes that evolve over time, said Duke.

“Another big factor from a sales perspective was the additional space we will now have for people and production operations,” he added.

The LDX 100 is a high-speed, native UHD camera built for IP-connected workflows. The camera, which relies on a new 2/3-image sensor, can be connected directly to networks, thus eliminating the need for a base station.

The switcher makes it possible to produce bigger shows with less space and weight, thus reducing the complexity from workflows. The K-Frame XP is SMPTE ST 2110 and NMOS IS-04 and -05 compatible. Kayenne, Karrera, GV Korona and KSP control surfaces are compatible with the K-Frame XP.

Grass Valley offers single-stream IP out of the backend of all its switchers, including the Kahuna, he added.

GV Orbit, introduced in September 2019 at IBC in Amsterdam, continues to evolve. The IP-native software built for a connected, distributed workflow enables control, monitoring and configuration of an IP network. It simplifies provisioning of devices on a network, reducing the time needed to provision a network from weeks or months to hours or days, said Shoulders.

Moving workflows to IP is “an on-ramp” to cloud-based workflows, he noted.

“Today, I’m here to tell you that GV is ready to participate in this cloud-based world,” said Shoulders, “and I present to you the GV Media Universe.”

The GV Media Universe is a concept designed around a comprehensive ecosystem of cloud-based tools and services interconnected with existing hardware solutions, GV partner offerings and a community of marketplaces, he said.

“It is a vision for the future of media that allows the customer to have complete control over the customization of their media factories,” he said.

The GV Media Universe offers a unified user experience based on an HTML 5 interface that enables users to produce their shows from anywhere. Besides having access to existing connected hardware, the GV Media Universe works with public and private cloud resources and is offered on a pay-as-you-go basis.

At the core of the GV Media Universe is the company’s Agile Media Processing (AMP) platform, which makes it possible for users to increase their revenue streams through experimentation and micro-targeting audiences without incurring the traditional expense of doing so, said Shoulders.

AMP also makes it possible to manage the latency associated with cloud-based production—something that has been a “nightmare,” he said.

Grass Valley will hold an online event, “GV Live Presents,” for customers and partners on April 23 at 11 a.m. EDT, during which more information will be revealed, said Shoulders.