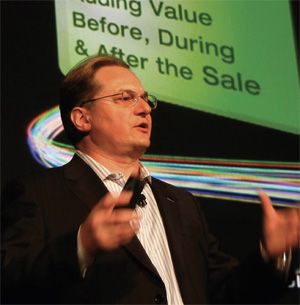 Alain Andreoli
Grass Valley, one of the iconic equipment brands in the television industry, is off and running under new ownership and management. As of January 2011, it is owned by Francisco Partners under the guidance of president and CEO Alain Andreoli.

"Francisco Partners is here for the long term," he said in a press event at the NAB Show. "We want to make Grass Valley the innovator again. … It means we will be more and more of a consultant for our customers."

Grass Valley launched Stratus, a media workflow application suite that allows content stored on Grass Valley K2 Summit and K2 Solo servers to be viewed and modified from anywhere in the world. Also new are upgrades to the Trinix router, which provide direct fiber optic I/O and multiviewer output from the router.

In response to a question that's on a lot of minds lately, Andreoli said that Grass Valley does not expect any manufacturing delays as a result of the earthquake and tsunami in Japan, but some components have limited supplies. © 2011 NAB