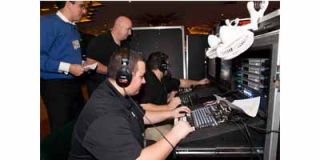 SEATAC, WASH. — The Empire City Casino at Yonkers Raceway in Westchester, N.Y., ordered a full-HD video flypack from Advanced Broadcast Solutions through the audio systems integration firm’s Pittsburgh office. The casino has been using the system since October to produce two ongoing series.

Empire City Casino has had an in-house HD broadcast facility since 2006, when the facility was renovated and expanded from the largest harness racing track in the state to include a 5,300 slot casino. One of its regular series is "Empire City’s Lucky Break," a three-camera production shot on location in the casino’s entertainment lounge using the new flypack. The one-hour weekly talent show is shown on Sundays on Cablevision throughout the Greater New York area.

The flypack is also used for a horse racing handicapping show, which is produced with a virtual set. Michael Rooney, director of media convergence, plans to use the new flypack to record presentations during other events and concert performances at the casino.