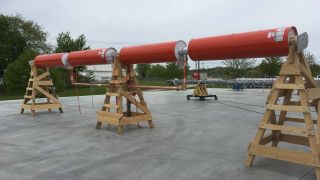 RAYMOND, Maine—Dielectric has begun to transition the focus of its antenna and RF component production from television stations assigned new channels in the FCC’s spectrum repack to the needs of TV broadcasters wishing to deliver ATSC 3.0 over-the-air service.

The repack, which is entering its final phase, has seen Dielectric book nearly 1,000 antenna systems, 82% of the repack market, the company said.

“We have booked 959 repack or displaced antenna arrays in North America since we began taking repack orders, and have shipped more than 930 of those arrays over a 30-month period,” said Jay Martin, vice president of sales, Dielectric. “Upon adding in non-repack projects, we estimate that Dielectric will ship 1,065 medium-to-high power antennas within that period in North America alone by the conclusion of repack.”

To meet the surge in demand created by the repack, Dielectric set up two manufacturing facilities focused on designing, building and stocking antennas and other RF systems, the company said.

“Beyond antennas, we built 111 miles of transmission line, 1,039 RF filters and 101 multichannel combiners for TV alone,” said Martin. “We built 395 complete RF systems, and we built many of these within days to address very short lead times. The volume of product we have manufactured and shipped has been astronomical.”

With the repack nearly in the rearview mirror, the company is preparing for demand it anticipates will stem from NextGen TV. It is employing strategies to prepare for ATSC 3.0 that are similar to those it used to ready for the demand created by the repack.

“That will ensure we can properly address growing interest in our Powerlite low-power antenna systems for ATSC 3.0 SFNs, while also serving our other customers without delay,” said Martin.

The company also anticipates the replacement market for TV antennas around the world to remain strong, as more than 200 high-power antennas and transmission line runs in North America alone have been in operation for 30 years or more, said Martin.

“We have added support for nearly 20 additional antenna patterns that apply to NextGen TV SFN systems and low-power TV systems worldwide, along with a comprehensive software toolset for consultants to enhance SFN coverage analysis and antenna configurations,” said Pelletier.

The company also recently introduced its RFHawkeye real-time monitoring system for antenna feeds. RFHawkeye, the Powerline Series and NextGen TV developments will be presented this week during the NAB Show Express online event. The company’s virtual presence is accessible online May 13-14.

Dielectric has also posted a white paper that was to be presented by its Vice President of Engineering John Schadler at the cancelled 2020 NAB Show in April. The paper, “ATSC 3.0 SFN Network Planning and Antenna Design,” also is available online.