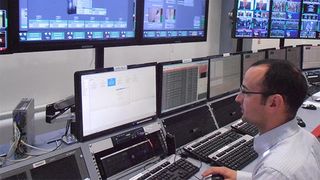 Installed in CJI's new playout center near Paris, the DIVArchive system manages 30,000 hours of media among CJI's archive library, near-line server, and playout servers for the playout of MultiThématiques, a group of 15 SD and five HD channels broadcast by CANAL+. CJI uses two tape libraries on two different sites — in the long term, one could be the backup for the other.

The SGT system manages the file-based ingest of media from CANAL+ and also coordinates with DIVArchive to archive the media in the library. When a playlist is loaded for playout, the SGT automation directs DIVArchive to restore the media from the library to the playout server. The system is designed to archive 50 hours of video per day in two instances, while simultaneously restoring 10 hours of video per channel with less than 12 hours' delay.