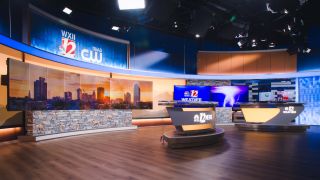 With nearly 40 units installed, the L1.2 and L1.4 lights create the base lighting for the daylight balanced (5,600K) set. The L1.2s were used mostly as side fills, while the L1.4s were positioned at the front. In addition, Lupo DayLED fresnels were added to create crisp lighting for eight specific talent positions around the set.

Dan McKenrick, the lighting designer for the studio project, said an advantage for using LED lighting fixtures on a news set is the extensive dimming range without color temperature change, allowing for better control for a diversity of skin colors. He also found Brightlineâ€™s ability to add intensifiers to increase output and control screens to restrict the light path to be useful during the project.

Another element that McKenrick had to take into consideration when selecting and installing the Brightline lights was the fact that two configurations had to be devisedâ€”one for the current COVID-19 restrictions and another for when newscasts are able to get back to normal.