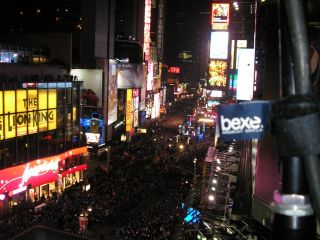 NEW YORK— Bexel supported live coverage of New York City’s New Year’s Eve celebration as it was broadcast worldwide, continuing the role it has filled for a decade. The company’s six on-site engineers coordinated the wireless operations and established a fiber infrastructure for the production truck’s feeds.

The 2012-13 event included four outdoor locations, spanning from the main outside stage at 43rd Street up to 46th Street at the Nivea Stage, as well as inside Times Square Studios, including the green rooms and production hallways, and so Bexel deployed its RF Over Fiber Antenna System. The scalable system offers a single point of interface for wireless equipment to the production truck. Coverage requirements for the host network extend from 47th Street and Broadway to 43rd Street and Broadway.

“Seamless coverage of all zones through the RF Over Fiber System is a tremendous challenge due to the sheer quantity of wireless devices in use, the shrinking UHF spectrum and the density of people at the event,” said Senior Project Engineer Jim Dugan.

Bexel also provided the three miles of fiber infrastructure, which was installed during the night by local union workers.

“Bexel fiber essentially touches all feeds that are broadcast around the world.” The company provided a custom rack built with fiber optic systems to accommodate signal transport to various locations around Times Square, including Duffy Square and Nivea Stage, to name a few,” said Perry Sanderson, technical sales specialist/fiber, Bexel. This infrastructure carried the signals from the events, including the classic ball drop, and distributed them to domestic and international broadcasters.