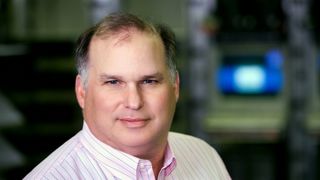 BURLINGTON, MASS.—Avid today announced that its board of directors appointed Louis Hernandez as president and CEO, effective today. Hernandez succeeds Gary Greenfield, who will remain on Avid’s board of directors. Hernandez has been a member of the Avid board since 2008. Most recently, he was also chairman of the board and CEO of Open Solutions, Inc., a technology provider to financial institutions worldwide, which was acquired in January 2013 by Fiserv, Inc.

Greenfield, pictured left, took the reins of Avid in early 2008 under growing pressure from desktop editing platforms such as Apple’s Final Cut Pro. Revenues that year slipped to $845 million from $930 million in 2007. They slipped precipitously in 2009 to $629 million, then showed some recovery in 2010, reaching nearly $680 million. Revenues for 2011 were reported at $677 million. The company has reported a net loss each year since 2006, though progressively smaller during Greenfield’s tenure, from $198 million in 2008 to nearly $21 million in 2011.

Avid’s 2012 earnings call is scheduled for Feb. 26, 2013. It will include the impact of Avid selling off it’s consumer audio/video business for $17 million over the summer. The divestiture was part of the company’s strategic plan to focus its resources on the professional market. The consumer line included Avid Studio, Pinnacle Studio and the Avid Studio App. Avid paid $462 million for Pinnacle in 2005. The consumer business contributed around $91 million to Avid’s 2011 revenues. A restructuring charge between $19 million and $23 million was expected.

As of Sept. 30, 2012, Avid had no long-term debt (correction, the below commenter is correct. Avid reported long-term liabilities of $36.6 million) and cash and equivalents of $71 million. Shares of Avid (NASDAQ: AVID) gained about 2 percent this morning to trade at $7.70.