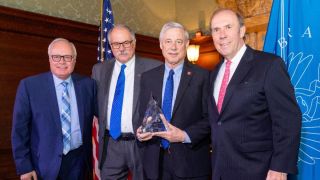 WASHINGTON—America’s Public Television Stations has spent Wednesday, Feb. 26, on Capitol Hill to recognize a number of U.S. representatives with their Champion of Public Broadcasting Award.

One of the announced recipients was Congressman Fred Upton (R-Mich.). Upton currently is a co-chair for the Public Broadcasting Caucus, which encourages federal investment in public media and works with public broadcasters on their missions of education, public safety and civic leadership in American communities. He also was previously (2010-2016) the chairman of the House Energy and Commerce Committee, during which time he helped pass legislation that established the broadcast spectrum incentive auction and ensured channel repacking costs were covered.

Congresswoman Rosa DeLauro (D-Conn.) has also been recognized as a Champion of Public Broadcasting. Rep. DeLauro is the chairwoman of the House Labor-HHS-Education Appropriations Subcommittee and in 2019 helped to secure the $20 million increase in federal funding for public broadcasting, the first increase in a decade.

Another Champion of Public Broadcasting Award was given to Senator Dan Sullivan (R-Ark.). As the Republican sponsor of the annual Senate public media funding letter for the last two years, Sen. Sullivan also was critical in helping to raise public broadcasting's funding.

In addition, for just the second time in the organization's history, APTS has bestowed its Lifetime Achievement Award to Congresswoman Nita Lowey (D-N.Y.), chairwoman of the House Appropriations Committee, who APTS says has been a leader on public broadcasting issues for her 32-year congressional career.

"Congresswoman Nita Lowey has been an effective, energetic and courageous champion of public broadcasting during her entire career on Capitol Hill," said APTS President and CEO Patrick Butler. "Her advocacy on our behalf has secured and increased our federal funding and made it possible for us to teach millions of America's children, protect lives and property through our public safety communications mission, tell the stories of hometown America in memorable ways and equip our citizens to lead the world's most important democracy."

"I have been proud to work to protect and advance public broadcasting throughout my tenure in Congress and look forward to building on the success of past years to continue to support access to public broadcasting for all Americans," said Rep. Lowey.

The only other recipient of APTS' Lifetime Achievement Award was Sen. Tom Harkin (D-Iowa) in 2014.